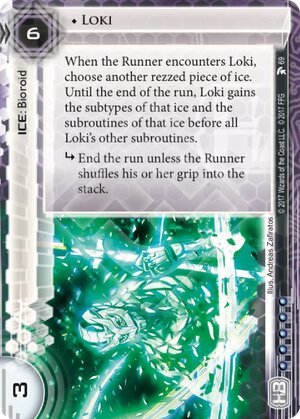 When the Runner encounters Loki, choose another rezzed piece of ice. Until the end of the run, Loki gains the subtypes of that ice and the subroutines of that ice before all Loki's other subroutines.

subroutine End the run unless the Runner shuffles his or her grip into the stack.

FFG has a bunch of ways to weaken too strong ice such as making it unique, making it cost 5 influence and making it expensive to rez. Guess what, that's what Loki is: unique expensive HB-only ice.

It'd better be worth it if it's to see any play at all. And it is.

Loki is bioroid ice that can't be clicked through, meaning it can be used with all the bioroid support cards of HB without having any of the typical downsides. There's one sub that may as well say "End the run" as most runners will only go empty grip in a make-or-break run. But because of the wording Endless Hunger doesn't work on Loki.

Of course the real value of Loki is in the on encounter ability. Point to a rezzed piece of ice and Loki the subtypes of that ice but more importantly the subs.

The big problem however is that Loki has strength 3, which is easy to break with most breakers. However consider a Spiderweb. That's a barrier with 3 subs and strength 2. If Loki copies the subs it becomes a 4 sub with strength 3 barrier of which the runner needs to break 3 subs and wants to break 4 subs. A 3 strength 4 sub barrier costs 4 to break with Paperclip and 5 with Corroder. Other good barriers are Battlement and Eli 1.0 / Eli 2.0.

In the sentry department we have Cobra, Errand Boy, Ichi 1.0, Negotiator, Pup, Rototurret, Shadow, Swordsman (though it may be better when encountered directly if the runner has an AI), Tsurugi, Veritas, Vikram 1.0, Zed 1.0/Zed 2.0 (if Loki is behind click-through ice).

Of course there is many more ice and there's plenty of argument why some ice combos well with Loki and other doesn't. The ice I have highlighted is roughly ice that's either cheap or medium cost in combination with an annoying restriction that makes it work better on Loki despite the low strength and that in any case has multiple subs. I've excluded some ice like Archer which is very costly to rez (i.e. forfeit agenda or bad publicity). By no means is this list exhaustive however and I look forward to suggestions about other cards that work with Loki.

Because Loki works so well with a lot of cards it's very flexible. If you have a barrier, sentry and code gate rezzed you can determine during a run what would be most taxing for the runner. For example if you know you have a code gate behind Loki and the runner has a Gordian Blade you may decide to make Loki a barrier. Or if you see the runner has only a trash-to-use killer you may want to make Loki a sentry to get rid of that killer.

It's this flexibility and the potential for being a 3 or 4 sub ice that makes Loki worthwhile.

Because of the low strength Loki is vulnerable to ice destruction however, so keep that in mind.

Oh and if you happen to run a HB Sandburg deck Loki should fit in quite well.

EDIT: A previous version of this review said Hive works great with Loki because the subs don't go away when used on Loki. This is incorrect. Thanks Toper for pointing that out.

(Blood and Water era)
Silv 316
Good review, but note that there's no Hive synergy, because Hive would have already lost subroutines and Loki only copies the remaining ones. — Toper 26 Jun 2017
Good point. Hive is still a good combo with Loki in the early game (you effectively get an extra hive on the board) but it's not a great combo as I thought. — Silv 26 Jun 2017
I just realized Loki is even better than I thought with some ice. If you put a Komainu in front of it you can use Loki with the Komainu subs since those last until the end of the run. And there's bound to be more tricks like that. — Silv 26 Jun 2017
2

I just popped in to say how absolutely disgusting this is with Excalibur. No more runs this turn...oh and also if you want to keep THIS run you can say goodbye to your hand. Then it turns out they're running a Shock! and they die hilariously. Or just put a Kakugo behind it for a hard kick-out. Not to mention it's essentially a second copy of the damn thing on a different server...

Unfortunately the really fun places to do this tend to be Jinteki (White Tree, AgInfusion) which is a pretty huge influence hit. AgInfusion especially could be really fun since you can just send them at the Loki server over and over and over and vary which ICE you use with it based on what their current setup is. The White Tree approach is a little more boring...just force them to run the specific central of your choice if they want to see any of your remotes. I guess you could do something like Wormhole or Susanoo-no-Mikoto to try and force them into an Excalibur subroutine, but influence starts tightening up pretty quick.

...also wait, that top ruling means you can use Loki as a repeating trap since the trash effect traps generally come with doesn't happen. There are a few hoops to jump (rez the trap without trashing it, prevent the Runner from running the trap in order to trash it) so this probably all falls into the Grade A Jank bin. Let's have a quick look at all the traps, shall we?

Also, am I the only one that noticed that Loki's natural subroutine stops Faust dead in his tracks? That seems kind of neat flavour-wise.

(Blood and Water era)
LordRandomness 230
Universal Connectivity Fee shouldn't work. The runner loses 1c if he is NOT tagged and can ignore the sub if he IS tagged, because the self-reference ability doesn't work on Loki. — Krams 26 Jun 2017
And I disagree on the hard stop for Faust. It's a mere 2 cards tax, which should be fine for every Faust deck. The point is, if the runner relies on Faust, he can break Loki no matter what weird ICE you copy. — Krams 26 Jun 2017
I was under the impression the self-reference bit failed and everything else (i.e. the credit loss) succeeded? — LordRandomness 26 Jun 2017
Hard to say. The official FAQ says "If a card copies the text of another card, and the copied text includes a self-reference, the copied text does not function unless it explicitly says so." To me, that says if any subroutine has a self-reference, the entire copy operation fails (which has the virtue of simplicity). Apparently the UFAQ disagrees though. — Toper 27 Jun 2017
1

The Jank Chronicles: A Lookie Into Loki

As has been noted in the ruling by Boggs, Loki gains Cell Portal's subroutine without the derez clause. This sets us up for the Incredible Infinite Loop Jank that people have been talking about in hushed tones ever since the beginning of time, or at least the core set. Unfortunately the same limitations apply:

In conclusion (for now), Loki removes one piece of the massive Rube Goldberg machine that is the Cell Portal Infinite Loop Combo, removing the requirement for Cell Portal's repeated re-rezzing. However, the limitations listed above still exist. Even so, with the proper setup, Loki can be an unexpected game winner.

The total cost of this example combo is:

In setup, 3 and 1 to install the relevant ICE (less, of course, with shenanigans). 1 and 1 to play Oversight AI, to rez Cell Portal. Any number of , up to 3, to install Patches should you need to.

Leaving the setup aside, which can be done over many turns, the maximum credit cost needed to fire off this combo in one is 11. Less, if you decide to rez Pup or Loki early with shenanigans. This is a lot less than the old Infinite Loop used to cost, what with the constant re-rezzing of Cell Portal. Despite the hefty setup costs, the addition of Loki into the game has created a cost for this loop that is actually... semi-feasible... okay, maybe not the most feasible thing in the world, but still much more achievable than it used to be!

And because you'll ask, the total cost of the combo, assuming Patches are applied (and they can only be applied to rezzed ICE, so that means you'd have to shenanigans Loki faceup, and that's going to throw calculations out of whack, so I assume you just rezzed it for its full price) is:

Without Patches, and assuming the Runner can't break Loki, the price goes down to 5 and 13. Obviously the setup would be put together as cards come into your hand, so think of this cost as being spread out over several turns. Making these numbers work is not outside the bounds of reality!

shit i forgot about the jacking out

Fine let's assume you also have a Labyrinthine Servers token to use. That brings our cost up by 6, barring shenanigans, and 5, plus the risk your agenda would be stolen. Not recommended.

Alternatively, you can throw a Whirlpool into the server, which ups our cost by 1 and 2 for the install (again, barring shenanigans). More feasible and it brings our cost up to 6 and 15, which still doesn't look too bad.

In double conclusion, I'm an idiot but thanks for sticking with me anyway. Pretend that I made no mistakes.

tl;dr - long rant and analysis about how Loki has changed the feasibility of the Cell Portal Infinite Loop Jank. It's made it cheaper and removed some of the moving parts but it's still, uh, pretty bad.

Works well with mythic ice if the runner has no AI.

As it cannot be clicked to break, it makes running first click, with just a killer installed, more hazardous for the runner against HB.

If Loki chooses Next Gold the sub does zero net damage; but presumably that still triggers Tori Hanzo or Clan Vengeance if it fires.

(Blood and Water era)
ZomB 88
Well that would be mainly Excalibur. Chimera gets a subtype upon rez and Mother Goddess only works if you only have all no ice with any subtype. Kitsune may or may not be possible, I'm not sure whether the UFAQ means the entire subroutine doesn't resolve or only the bit about trashing the card. — Silv 24 Jun 2017
On the subject of Mythic ICE: Why, oh why, is Loki itself not Mythic? He has no other features common to bioroids, but he feels like a Mythic ICE. Every ICE should be either barrier, Code Gate, Sentry, Trap or Mythic. It's just strange to have none of those subtypes. — Krams 9 Aug 2017