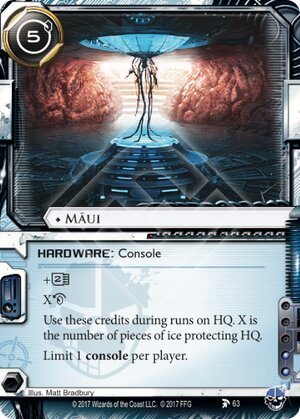 Use these credits during runs on HQ. X is the number of pieces of ice protecting HQ.

Illustrated by Matt Bradbury
Decklists with this card

I think time has been very favorable to this card and it deserves another look in 2021.

The same old benefits still apply. It's 5 for 2 MUs, which isn't great but it also comes with recurring credits which help make up for that expensive cost.

The old review compared this to Desperado, which is probably the better console. Desperado has rotated out, however. Now a fair comparison would be against Paragon, Desperado's replacement.

Paragon is a fair bit nerfed compared to Desperado, IMHO, so I would say this comparison only gets more favorable for Maui.

Recurring credits are worth a lot if you can maximize them and seeing how this is a Criminal console there is a lot of in faction synergy with it. Pheromones does a similar thing while using up an MU. MUs are pretty hard to come by in Criminal, so being able to save 1 from moving your program onto your Console AND to have another one built into the Console is a pretty good deal. That gives you effectively 2 more MUs to work with. Pheromones is also rotated out, so there is that, too.

A particularly good feature of this card is that if the corp is trying to counter your HQ attacks, they generally do it by playing ICE. This console has a built in way to punish that, by giving you more credits every turn.

Also, as a side note, I think HQ is under appreciated as server for one to attack.

With a remote, you often kinda have a good idea if your run is going to hit an agenda or not. With R&D, you know you are seeing new cards. If there is an agenda on top of the deck, you are pretty much guaranteed to get it from an R&D run.

HQ is different because they could have 4 out of 5 cards in hand be agendas and you could still fail to hit one. The more random nature of attacking HQ causes people to focus on it less, I think. More often than not in my games, HQ is the least ICEd server between R&D, HQ, and the scoring remote.

That potentially leaves more space for HQ attacking decks and potentially improves the effectiveness overall of this console.

Lastly, under another review, someone responded that Desperado has an advantage because it helps against asset spam. As of the time I write this, Miss Bones is legal and is a much more powerful counter to asset spam than what Desperado was doing in that regard. It is also in faction for Criminals. That means there is less need to rely on the 1 per run from the console as a counter to asset spam. Anyone worried about asset spam should probably be playing Miss Bones and freeing up their console slot for something else instead.

(continued) @Raiddinn I would be interested to know how you rate Māui compared to The Gauntlet. I feel the added access punish the corp more if they rez ices on HQ. Also, the recurring creds can be used once per turn. It does "reimburse" itself, so it is more economical. In an As deck, using HQ Interface, it would have even greater value

A big advantage of this over The Gauntlet is that it synergises with Diversion of Funds, Embezzle and the like. I think the problem with both Console is that they cost 5<span class="icon icon-credit"></span>, which is pretty prohibitive in an already cash-strapped faction. Sure Māui will pay that back eventually, but far too slowly when you compare it to Paragon. I don't really think Miss Bones is a good argument against the run-for cash consoles as asset spam support, because why not both?

I don´t think that Criminals lack cash. Not only they can use neutral Dirty Laundrys and Sure Gambles, but they also can include Easy Marks and Bravados.

(Markdown stopped working so I pre-posted the comment and continued with a new comment) Combine with Daily Casts and the often forgotten Bank Job and you really will not lack money, although Paragon would also be good. Also, Criminals often lack MU, so Maui can fix that.

There seems to be a law that every criminal breaker has to be compared to Desperado. So let's do that. Desperado gives you a credit per successful run, becoming more valuable as you make more runs. Māui gives you, in effect, 1 per ice on HQ per turn, provided you run HQ at least one each turn. Māui becomes stronger as the corp's defense of HQ becomes harder to breach.

Desperado is 2 cheaper to install and adds one less . That probably doesn't matter much, but it factors in to the effective cost difference. I tend to consider 1 to be worth 1 on a console when comparing consoles.

So which one is better? As all too often it depends. If you have a heavily HQ focused deck Māui can actually be the better console, strange as it may sound to those accustomed to the reign of Desperado. My reasoning is this: your average corp will against a criminal put 3 pieces of ice on HQ. That makes the maximum efficiency of Māui 3 per turn, assuming you run on HQ every turn and you use all three credits every time. Desperado makes as much money as you make successful runs each turn. Now I tend to suck at defending my servers and I've been visited by opponents a lot. But it's pretty rare for my opponents to make more than 2 runs per turn on average unless HQ or R&D has no ice in front of it. Hence I'm going to take 2 per turn as a best case average yield for Desperado.

If your deck doesn't have a laser focus on HQ though Desperado is probably more economical. It is in any case more flexible.

(Blood and Water era)
Silv 323
The big issues are that Desperado pays off much faster, and also helps against asset spam. — EnderA 12 Jul 2017