Place 8credit from the bank on Bank Job when it is installed. When there are no credits left on Bank Job, trash it.

Whenever you make a successful run on a remote server, instead of accessing cards you may take any number of credits from Bank Job. 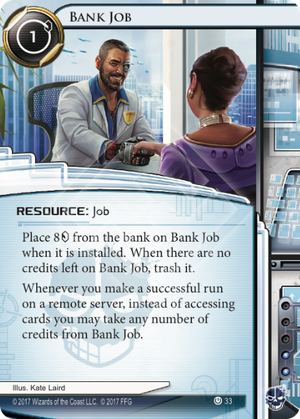 In canon lore, the events of the Revised Core Set take place 5 years after the original. All the players are up to their same tricks, but subtle things have changed. Compare to the original Bank Job. The art depicts a young Gabriel Santiago counting money after a successful Bank Job. The alternate art is even more insightful; it shows us the job was a real, physical heist. Imagine the opening scene of The Dark Knight, or one of the jobs from Payday. Big, flashy, and violent.

The new Bank Job is different. Gabe's gotten a wee bit older, and he can't wear clown masks or carry duffle bags without getting a bit winded. So he changes his approach. Being the charmer that he is, Santiago doesn't knock over some branch bank or a credit depository in broad daylight with some armed goons. No, Gabe's been in a few scrapes with the law, and doesn't want to draw any more heat to him. Instead, he does the unthinkable. He gets a job at Titan Transitional, the biggest banking institution in the worlds. Better yet, he impersonates some Titan exec while he pretends to be a good little drone. He makes deals with clients, eats lunch in India, and then disappears without a trace. Well, one trace: 500,000 missing Titan credits and one frightened employee dropped off on a street curb.

In a faction that is already quite flush under normal circumstances, this gives Gabe yet another way to make piles of money and then feel smug as he uses better breakers from Anarch. But is also has another benefit I didn't appreciate at first - threat. First things first...

In a game where making 3 or 4 is generally a damned fine deal, the net 7 you can gain from this is huge. Just to put the amount of money into perspective, this card will give you:

The same as a Hostile Takeover without any recurring penalty.

The same as a Melange Mining Corp. for only 1 click.

Only 2 less than Stimhack, without the brain damage.

3 more than the universally cherished Sure Gamble, with a much lower cost to entry.

Now for that second benefit...

When a game is close, the Corp. and runner don't have that many credits between them. This can make every run count, and therefore can make trashing Corp. assets Iike PADs and sexy manbots a tough call, because you might leave yourself unequipped for stealing agendas when they inevitably appear. As a result the Corp. will sometimes feel confident enough to leave them out in the open, smug and convinced you don't have the clout to tackle both.

'We'll see about that', you think, and install this as you loosen the cuffs on your tux. Suddenly those exposed assets have just given the runner one of the best economic boosts in the Core Set. Considering their rez costs, net 7 is 8 turns' worth of PAD Campaign, 3 turns' worth of Adonis, and the best part is you can then run again and trash them far more comfortably, with the same money they've just given you. 'Bet you wish you'd protected them now, eh buddy?' You'll then think, and then they will, if only to lessen the sheer number of Benjamins you'll be scooping for their arrogance otherwise.

(23 Seconds era)
Tirranek 534
Instead of taking all 8 credits from this bank vault, take just 7. Remaining 1 sell to Aesop for 3, because the only thing better than loads of cash is even more cash. And love, but there are no combos for love. — H0tl1ne 29 Jul 2016
Oo nice idea! Only thing about Aesop in the Core Set is there's only one of him. These were in his early-closing days obviously. — Tirranek 29 Jul 2016
You could always keep this BJ *cough* with one credit on your table, until Aesop opens again. These gold wirstwatches you snatched from bank patrons are not going anywhere, because who'd pay 2 creds and a click to deprive you of them? — H0tl1ne 29 Jul 2016
In most cases this is going to cost you two clicks to gain 7 credits, not one click. It costs a click to install, and another to make the run, and if you aren't benefiting from other successful run triggers, it's certainly part of the cost. Also, many decks are able to play around it, either by not installing remotes, defending their remotes, or putting cards in remotes naked that can be trashed before the run is successful, destroying the server (IE: Jackson Howard). That said, good card is good. — FarCryFromHuman 29 Jul 2016
6

Nothing yells naked remote hate more than this card. It is best used after a naked install for a 3.5 x 2 investment (probably the best click to credit ratio barring Sure Gamble, Luck Find and loaded Gorman Drip v1). I don't know if I'd install it early, if only to not give away your secrets.

Clearly will not have as much use in a Biotic Labor deck.

This is half the reason why Criminal runners are so rich (the other half is made up of Account Siphon, Desperado and Security Testing, but I digress). Try to always leave a single credit on the Bank Job, in case you ever need to avoid accessing cards (eg. Whirlpool into a Snare or some nonsense).

(Order and Chaos era)
postalelf 66
Quick rules question. If I run a remote, the Kon somehow trashes his remote, will I still be able to use the effect of this card? Even If thereare no cards in the remote left? — Rubenz 14 Feb 2016
@Rubenz short answer; no. Long answer; the FAQ (http://netrunnerdb.com/en/rules#faq) covers Destruction of Servers “If there are no cards installed in or protecting a remote server, then the server immediately ceases to exist. If a server ceases to exist during a run, the run immediately ends. Unless the run has passed step 4.4 of the timing structure of a run, it is not considered to be successful or unsuccessful.” — lunchmoney 24 Mar 2016
2

I'm not here to tell you about anything the other reviewers are talking about on here. It's MWL 3.3, and certain decks of the month (https://netrunnerdb.com/en/decklist/56560/daruma-s-wild-ride-2nd-at-gencon-undefeated-in-swiss) have been seeing some extensive play on jinteki.net lately. Well. Let me tell you a story. A story about a little criminal card that at first glance appears merely great. Stack 8 creds on this guy, cash out 7 of them, leave him on the board to chain with any type of trash ability like aesops or whatever. Blah blah. But against the above agfusion deck, it makes Labyrinthine Servers and getting hit with an Inazuma + agfusion combo into an 8 token advanced Junebug or Cerebral not only survivable, but actually mildly hilarious as the corp wastes his precious 2 Labyrinthine tokens and you, being the wise runner you are, only take a few credits off of Bank Job at a time and float it on the board to avoid his Kill Servers like the unholy plauge upon Netrunner that they are. Is it worth it to splash? I think probably not. But it is an easy include to crim decks in my mind with this nonsense running around "Standard Legal" for the moment. 11/10 amazing card for crim decks

(Magnum Opus Reprint era)
bovinepro 31
note i would only float that many credits on bankjob against this particular ID. — bovinepro 16 Aug 2019