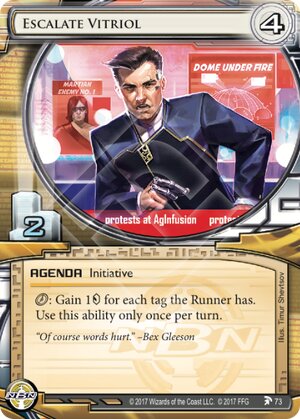 click: Gain 1credit for each tag the Runner has. Use this ability only once per turn.

Absolutely insane if you land a Midseason Replacements. But that's rotating soon, so what do we have afterwords?

Hard-Hitting News if you manage to make the tags stick, you suddenly have infinite Hedge Funds

Those are the only noteworthy cards I see working well with this, but if you manage to tagstorm them only with ICE, that's cool too. Overall I think it's a nice 4/2 that's competing with Explode-a-palooza and Net Quarantine. I think it is somewhere in between those two.

But as long as we have Midseasons, have fun clicking for 17!

Synergizes well with Zealous Judge to make back your . Also a viable choice against an Alice Merchant + God of War-heavy meta, which relies on tag-me to power certain clan resources. Historically, any deck archetype daring to go tag-me against NBN has found itself both empowered, because ICE like Data Raven ceases to matter; and afraid, because ICE like Thoth suddenly matters a lot. With Escalate Vitriol scored, though, that just changes to being afraid. I've seen God of War decks go to upwards of 30 tags. Imagine clicking for 30.

For short-term gains outside of this edge case, though, SEA Source and Hard-Hitting News are reliable tagging operations you can fire on your turn, though with HHN you need to - as has been mentioned below - get the tags to stick. MCA Informant is much the same. Unfortunately most of the other cards that help tag the Runner on your turn have, alas, rotated out. RIP, Big Brother and Midseason Replacements.

All in all, Escalate Vitriol is probably good as a one- or two-off if tag-me is heavy in your local meta. Would advise packing it with the Judge of Zealousness. Just keep giving them two tags every turn, then clicking to cash in on all of them! :3