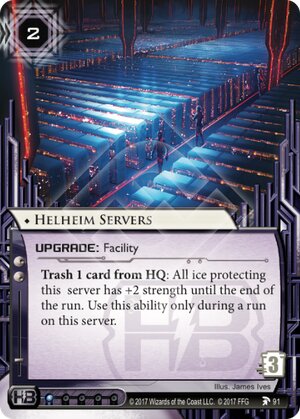 Trash 1 card from HQ: All ice protecting this server has +2 strength until the end of the run. Use this ability only during a run on this server.

Illustrated by James Ives
Decklists with this card

My first impression of this card was negative, it didn't seem worth it to pay 2 and a card from HQ in order to boost the strength of ICE just a little bit for one run. And an annoying upgrade should only be counted on to last for one run in my book since the runner will generally want to trash it.

However then I figured out one little detail: you can trash multiple cards from HQ to boost strength multiple times. Why is this so important? Because it allows you to set up a server with extremely nasty ice where the runner thinks they know what the ice is and think they have a safe plan to break all the nastiness only to be confronted with much stronger ice.

Yes, the runner can jack out (unless Whirlpool and An Offer You Can't Refuse are used) but some ice can simply bring the runner very close to death on their own such as the normally very weak Komainu. It would only take a little extra nudge (e.g. House of Knives) to flatline the runner.

It's a good thing that influence on Helheim Servers is only 1 since as all the cards just mentioned are Jinteki. That's not to say that HB can't profit from Helheim either, just look at Brainstorm. Throwing away all the cards in your hand and 9 in order to reduce the runner's handsize to 0 is a good deal in almost any situation.

Helheim Servers can be used in a more straight plan as well, if the runner doesn't have too much credits it can boost the ice of a server high enough to keep the runner out for the remainder of a turn and score an agenda. That's generally a bit of a panic play but it could make the difference between win and loss. Whether the possibility of using it in that way is worth including it... I'm skeptical.

Because Helheim seems to work best in a trap situation I expect it to be mostly used in decks built around it, but in such decks it could be very nasty indeed.

(Free Mars era)
Silv 345
Edit note: added Brainstorm as it combo's really well with Helheim. — Silv 27 Jul 2017
I recently heard that Helheim server security has installed big, flashing "Panic Button"s everywhere... — Hongkong Koma 2 Aug 2017
Am I incorrect to assume that you can boost Architect with this, then fire the sub and install your trashed cards right away? Also this combined with woompo means you can never steal agenda in hand? — sneakysnake 12 Aug 2017
snake: if Architect fires, yes you'd be able to reinstall the trashed card. This doesn't do anything special in combo with Whampoa since it already lets you discard a card in real-time. — phette23 11 Sep 2017
I'm not sure with the timing structure of this card. When can I use it? I guess only BEFORE the runner uses his breakers, not after he pumped the icebereakers strength, correct? So Runner approaches, I decide to use Helheim, then he uses his breakers? And if theres more than one ice, while approaching the next ice i can use Helheim again? — Vortilion 13 Aug 2018

The last opportunity you have to use this at a time when it'll actually affect the icebreaking is during the timing window that's normally used to rez ICE (i.e. after the runner is committed to the encounter, but before the encounter actually starts and thus before icebreakers are usable). So the Runner knows how much Helheiming you're going to do before choosing whether to break. You can use it again on either the same piece of ICE or a later piece of ICE (and it lasts all run).