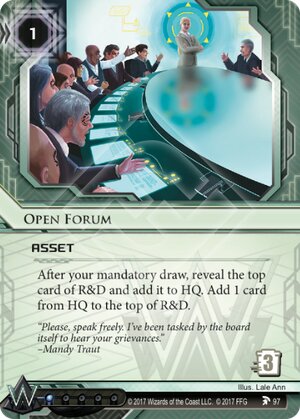 After your mandatory draw, reveal the top card of R&D and add it to HQ. Add 1 card from HQ to the top of R&D.

"Please, speak freely. I've been tasked by the board itself to hear your grievances."
-Mandy Traut
Illustrated by Lale Ann
Decklists with this card

So aside from some relatively inconsequential differences (1-4) Open Forum is strictly worse than SAU. Considering FFG had to put SAU on the super-MWL (TLA anyone?) because it's so utterly overpowered it's good that Open Forum is less powerful. The big question is just whether it's not underpowered instead.

I think not. Open Forum isn't a great card but I see potential for it in the right decks.

The big thing is that Open Forum puts a card on top of R&D, meaning you can control what's on top of R&D for as long as Open Forum is on the table. Obviously the runner will have a pretty good idea due to all the cards they see and if you use this trick you'll show the runner every single card that goes into your hand (mandatory draw will be the card you've put back so Open Forum will show what would otherwise be the top card) but there's absolutely value in controlling the top of R&D.

That value of course is in ambush cards like Snare!. If the runner knows or suspects you have a Snare! at the top of R&D they'll think twice about a digging trip.

Other than this trick I don't really see much value in Open Forum though. While it gives you more control it doesn't actually let you draw more cards, unlike SAU. And the cost of showing the drawn cards to the runner can easily outweigh any other benefits.

I do see a potential in use in Jinteki however, given that Snare! and Celebrity Gift are in-faction there.

(Free Mars era)
Silv 345
There's a bit more to this than trap. Open Forum lets you play with a Mutate engine in Weyland, without having to import more. Tithonium is just godly if all you paid for it was the install&rezz of an Ice Wall + Mutate. — Akanthinos 25 Jul 2017
It would be pretty good in adding things like Sapper and Archangel to the top of R&D rather than having them in your hand — Countzer0 30 Jul 2017

I think this should be compared rather to Daily Business Show. It has the same net draw (0), but business show puts the cards to the top rather than to the bottom and doesn´t reveal the cards, so I think we all know the winner here