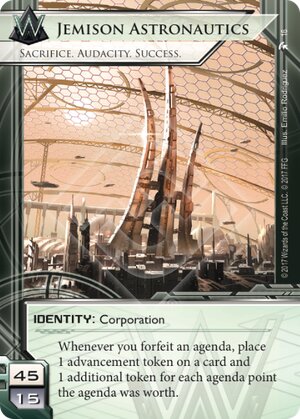 Whenever you forfeit an agenda, place 1 advancement token on a card and 1 additional token for each agenda point the agenda was worth.

An interesting identity. It seems designed to offer a different way to gain agenda points: by trading up.

At Jemison they do things differently. You forfeit one agenda and get agenda points plus one back as counters.

On the face of it that sounds like a terrible deal, a 5/3 agenda gives back 4 in counters. But there's method to this madness. Consider that your score area is the safest place agenda's can be, only Turntable can get in there. If you can score an agenda in one turn and somehow trade it for another in the next turn you don't have a runner's turn where there's a server with a big neon sign "agenda's here" over it.

On Mars there are new options available however. The winds have so far uncovered the following beneath the red sands:

Quarantine System is key here. It's what lets you forfeit ICE without spending a click. If you can get Oberth Protocol that's nice but unless you're going to turn a Hostile Takeover into a Vanity Project you don't need it if you have Quarantine System and a turn to spend.

This identity has its downsides though. Not in the deck and influence limits, those are standard enough, but decks using Jemison are going to be highly reliant on its ability being available. That means of course that Employee Strike is a critical threat. Luckily there are good and cheap currents available to dispel an Employee Strike such as Paywall Implementation, Enforced Curfew (makes Şifr hurt more) and Cerebral Static for some what-goes-around-comes-around.

Another threat is that runners trash Quarantine System. Certainly at first runners will often not realize the importance of this card since it's rather underwhelming at first glance, but it won't take them long to figure out your game.

All in all Jemison Astronautics is an identity for people who want to play a fairly standard form of Netrunner in a slightly different way. It shows that on Mars even a walls and punishment behemoth like Weyland can learn new tricks.

(Daedalus Complex era)
Silv 345
Can confirm. This is a fantastic ID that is absolutely CRIPPLED by Employee Strike. Pack a current guys. Seriously. — Handsome Jack 15 Mar 2017
You can score a 5/3 *from hand* with Oberth installed. Install, rez Oberth, forfeit Hostile to give 2 counters. Advance once, get a bonus from Oberth. Advance again, score. Then, in the following turns, you have a SSCG equivalent sitting there that the runner has to trash. — Jashay 8 May 2017
No Currents needed. You should be playing standoff and Hostile takeovers in this ID. That's plenty of ways to disrupt employee strike. Plus, even without the bonus, you can just score a 3/2 with Oberth. — Severijn 3 Aug 2017
You don't necessarily want to forfeit false lead on your own turn anyway. Just wait for the runner to use two clicks, then forfeit it to end their turn. They won't be able to respond to whatever you advanced. — OrionJA 2 May 2018