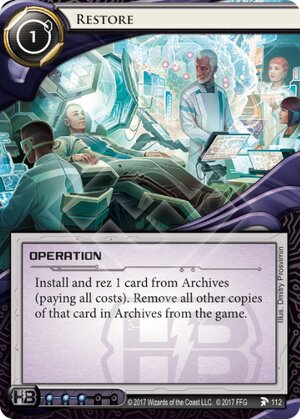 Install and rez 1 card from Archives (paying all costs). Remove all other copies of that card in Archives from the game.

Illustrated by Dmitry Prosvirnin
Decklists with this card

Now that Friends in High Places has been officially removed from play (MWL 2.0), this card makes a lot more sense.

To consider the value of corp recursion, it helps to compare it to its core counterpart, Archived Memories, which I think set a pretty good precedent for getting stuff out of archives.

Archived Memories - For a click and a card with two influence, you get to add a trashed card directly back to HQ.

Let's compare that to one of Jackson's post-rotation replacements, Preemptive Action:

Preemptive Action - As your last action of the turn, you may spend a click to recur three cards from archives, but must tutor or draw them again naturally to get them back into HQ.

FiHP - As your last action of the turn, you may spend a click, two credits, and a card with one influence to recur two cards from archives and install them.

To achieve the same thing with Archived Memories you'd have to have two copies (potentially costing 4 times the influence), play both, then spend two more clicks installing them. The cost for saving three clicks, three influence, and a card slot? Two credits.

But let's not dwell on that.

Restore - For a click, a credit (plus the installed card's rez cost), and a card with three influence, you may recur a single card, install it, and you must rez it.

To achieve the same thing with Archived Memories, you'd have to spend a click and a card, and then another click to install the new card (rezzing it whenever you need to).

Effectively, assuming you intend to rez the installed card, you are spending a credit (and maybe an extra influence) to compress two clicks into one. (Also, the more copies of said card in archives, the less often you can do this)

In general, that's not a good deal, but if you really need assets, upgrades, or ice back fast, this will do the job. It's exactly what FiHP should have been all along.

This card really makes you scratch your head when you remind yourself that Friends in High Places was released just one cycle earlier. On the plus side it is one credit cheaper and is not terminal, however the restrictions it imposes are nothing to scoff at. You can install one fewer card and have to remove any other copy from the game which can be a significant drawback.

Also note that the rezzing part is mandatory, so recovering a big ice such as Tollbooth makes you pay in advance. The rezzing part would have been more useful in a meta where either Leela or Blackmail were prevalent. As it stands the rez is more of a downside. You can also compare this card to Archived Memories. Instead of getting back any card, you pay one more credit to immediately install it, but you have to rez it, so you cannot use it for traps.

All in all this seems to be most fitting for low rez-cost cards such as high impact assets like Jackson or gear check ice that was parasite'd. Do you have room for such a card? I'm really not sold on it.

(Crimson Dust era)
Capstone 42
One also has to wonder why FiHP has two less influence cost. — Silv 22 Aug 2017
Might pair really well with Whampoa Reclamation putting extra copies under R&D. The rezzing part is not much of a constraint unless you wanted to install a face down card from archives for the surprise effect. It's still great for having basically extra copies of Caprice/Batty/Ash etc. — Kaiji 22 Aug 2017
This is an interesting card that I believe was designed incorrectly because of fears of 'another Friends in High Places '. The effect is intresting — Dard 22 Aug 2017
I think it is a pretty cool card with a interesting and useful effect. Slot one Caprice, one Ash, and one Batty into your deck and get em' back a second time like Kaiji said. And it is another card (in addition to the too few others) that can rez a piece of ICE outside a run. That is pretty huge in my book. Leela is pretty OP and this will help vs her. Stop blackmail and DDoS BS too. I'm personally of the opinion that FFG should admit they made a mistake with FiHP, burn it, then offer this and maybe another interesting card as replacement. — quailman2101 23 Aug 2017
0

I agree that Restore is not a strong card. However it has the potential to be rather obnoxious in the right deck. Combined with Friends in High Places it can make relatively cheap trash-to-fire assets like Estelle Moon (2) come back from the dead even more often (and now I have "can't fight the Moonites" stuck in my head again). Yes, there is the risk that you need to throw a card out of the game, but for that you could use FiHP if you can afford to wait a bit or accept the price if your strategy is better served by pressing onward.

This card could have been interesting, but I believe it was designed poorly in fear of becoming another Friends in High Places. This card has a lot of potential uses; Rezzing a big peice of ice in aginfusion, Blackmail/ddos protection, Getting back a must have asset that has to be protected, but it seems likely they stacked too many downsides in fear of the card getting out of hand.

Removing all copies of the chosen card just seems messy, firstly it's difficult and inconsistent to play around and makes itself worse the later the game goes on, but it also introduces a nebulous gamestate since it doesn't reveal archives: maybe a copy is a facedown and wasn't removed and since the archive order isn't maintained another copy could be put in there later.

On top of that they seemed extra scared of the effect becoming another Friends / Jackson Howard must include in every deck so they gave it three influence practically ensuring it could only be used in HB, who already have Archived Memories and friends.

This could have been an interesting card if it removed itself and cost 1 or 2 influence as a worse version of the (perhaps to-be MWL'ed) friends but as it stands I think its an expensive card for niche effect. There is also some discussion of if you can remove agendas that hopefully will get ufaq'd.

(Crimson Dust era)
Dard 1
Agendas shouldn't be targetable at all by this, because the Operation can't resolve due to the fact that agendas can't be rezzed. Thus, agendas won't be removed from game. — Krams 23 Aug 2017
You'd think so, and it'll probably be clarified in the UFAQ. But there is some argument that the templating is the same as aaron and he can draw without removing a tag. — Dard 25 Aug 2017