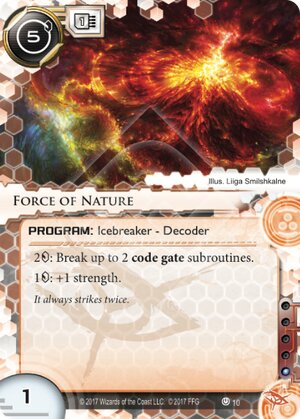 It always strikes twice.
Illustrated by Liiga Smilshkalne
Decklists with this card

(Kala Ghoda era)
coyotemoon722 49
What kills Force of Nature for me is the high install cost. Yes, I know, Yog.0 costs the same, but Yog requires no upkeep costs whereas FoN does. If this had cost 2 or 3 to install, it wouldn't be such a tempo hit to install in the early game. — HolyMackerel 11 Feb 2016
Anarch isn't supposed to have good decoders in faction though. — Bobbydigital 17 Feb 2016
2

(Chrome City era)
lynkfox 381
Half a credit cheaper. — Syntax 29 Jun 2015
What I don't understand about this card is the 5 install cost. Yes, it should be worse than Gordian Blade, but it is so in nearly any way possible: +1 cost, -1 str and confined breaking. This makes this the second to worst decoder in the game. (Mind the whale!) — Capstone 17 Nov 2015
I think Zu is the right comparison here. Basically the same abilities, but Zu is in the decoder faction and is therefore cheaper to install and gains Cloud. Still, the steep install kills FoN. And I feel like Anarch typically has low-cost cards compared to the other factions, too. What a weird, lame card. — PureFlight 10 Feb 2016