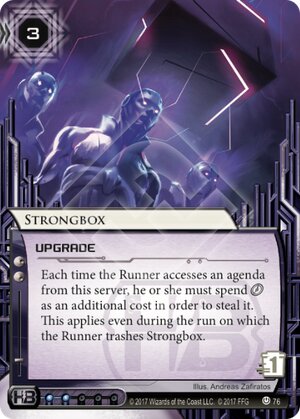 Persistent → As an additional cost to steal an agenda from this server, the Runner must spend click. (If the Runner trashes this card while accessing it, this ability still applies for the remainder of this run.)

This is a hard card to count on. Most runners will budget their runs to have 1 click left after access, just in case whatever they access is something nasty instead of a juicy agenda. There are cases when the runner may be click-less on access, but an unrezzed upgrade could by Ryon Knight or Ash 2X3ZB9CY, both of which they wouldn't want to hit without a click to spare.

Also, it is worth noting that Film Critic gets around this tax, since Film Critic doesn't 'steal' agendas, which this cost triggers off of.

The best case I can think of to use this is a heavily click-taxing deck, ID: Jinteki: Replicating Perfection, Current: Enhanced Login Protocol, and Region: Ruhr Valley could force the runner out of clicks before they get to access. Even that doesn't really sound good.

(The Universe of Tomorrow era)
bubbathegoat 597
Maybe you could pull off that combo in IG? Click tax wouldn't be as good, but the extortionate trash costs will keep it alive a lot easier. — TheBytemaster 27 Oct 2015
Putting it in IG sounds amusing, since it's not a grid, you could stack them. — elliotglendale 27 Oct 2015
I could maybe see this card in an Argus deck, if only because running on click 3 and losing the 4th click prevents them from removing the tag from Argus and forces the meat damage. There's probably better options out there, unfortunately, as 3 creds is an expensive rez for the effect. — PureFlight 31 Mar 2016
1

An early game stall card with bioroids or Turing, but don't expect it to last more than once. As a fail-safe to protect an agenda, this will stop any last-click runs or stop someone running through too many subroutines. The reasons this sees no play are significant: 3 to rez and 1 to trash, which relegates this to single-serving status. For the cost, a single piece of ICE, say, Enigma lasts longer, is a continued cost to the runner, and is zero influence.

Use only with a ton of bioroids if you keep having your agendas stolen by clicking through. If you have to use this, consider some Encryption Protocols to keep this around longer.

(The Universe of Tomorrow era)
Steamwood 302
To add on to this, Ronald Five would be an excellent tax to trash this card. — skyrunner36 26 Oct 2015