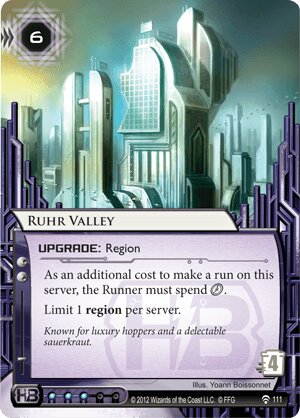 As an additional cost to make a run on this server, the Runner must spend click.

Known for luxury hoppers and a delectable sauerkraut.
Illustrated by Yoann Boissonnet
Decklists with this card

The popularity of Enhanced Login Protocoll shows just how powerful the requirement of an additional click to make a run can be. Ruhr Valley does the same thing, but as a region only on the server it is in, which can be difficult to deal with. Add to that it is expensive to rez, and it must be rezzed before the runner begins a run (potentially leaving the corp with too little to rez ICE on that server).

That is what gives Ruhr Valley a severe drawback, one that may not be countered by the drawbacks Currents like ELP have. It has some interesting possibilities, especially again with cards like Brain-Taping Warehouse and Ryon Knight, but the six rez cost is so hard to get going with still floating enough credits to make ICE possible to be rezzed. It could make for an interesting situation with ELP out at the same time however, though that is a bit of anti synergy with Brain-Taping.

(Chrome City era)
lynkfox 381
does this card still fire if the runner runs through a card ability? unlike ELP, this isn't stated. — 153351 20 Dec 2015
This is a very good question. I don't know but just going by the card text I would say yes. Most card ability runs start with "make a run". Ruhr Valley adds a click as an additional cost onto that. But need to check this out. — Restorationist 12 Dec 2016
2

Used it. Liked it. Here's why:

First of all, let's give the elephant some space; you do have to rez this before the runner declares a run if you want it to have any effect. That being said, is 6 bits (credits) a good price?

I'd say it all depends on how you use it. On a fort with one piece of ice, bioroid or not, six bits is steep, but if you're playing HB your ice is probably stacked thick. Maybe you have two pieces of ice, a third would cost 2 to install, a fourth, 3. Subtract that from Ruhr's rez cost of six and now we're looking at a more reasonable price, paid for at the timing of your discretion, instead of another piece of ice with an install cost upfront and the rez cost later.

The best Genesis Cycle combo I've found effective is to stick this behind Heimdall 1.0 on a central server, ensuring the runner can't simply click past. (Later, it strengthens 2.0 'roid ice as well, reckon.) As a late game card, if you're Haas-Bioroid: Engineering the Future and you see it too early, you might consider playing this for the credit on a slow turn, rezzing it when it becomes relevant.

Lastly, it's worth noting that it can help to mitigate the use of e3 Feedback Implants.

So when would I actually play this card? Let's imagine a 9 agenda HB deck with two SanSan City Grid and three Biotic Labor. I'm Haas-Bioroid: Engineering the Future and I have 3 Accelerated Beta Test I want to use so the deck is roughly 50% ice, with the remainder filled with economy. That's when I would play this card.