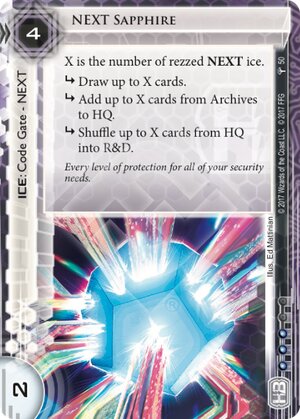 X is the number of rezzed NEXT ice.

subroutine Draw up to X cards.

subroutine Add up to X cards from Archives to HQ.

subroutine Shuffle up to X cards from HQ into R&D.

Every level of protection for all of your security needs.
Illustrated by Ed Mattinian
Decklists with this card

NEXT Sapphire is difficult to evaluate because its power depends on a lot of variables:

The nice thing is how these synergize. If all of them fire, or even just both the first and the last, the downsides for the first and last subroutines negate each other, and Sapphire lets you adjust your hand quite nicely. Oh, and there's always The Twins (plus probably Helheim Servers) for an "infinite" combo to trigger all of the subroutines an arbitrary number of times. (Helheim to make it unbreakable, then recursively using The Twins and another copy of NEXT Sapphire in HQ/Archives, probably playing this out of CI.)

HOWEVER, there are downsides to NEXT Sapphire that are not obvious at first.

The primary weakness: Usually one of the subroutines is fairly harmless, especially to let fire repeatedly. If you're running HQ, letting them draw cards could populate their hand with more agendas to steal. If you're running R&D, letting them shuffle cards back into R&D is probably fine, and usually doing it more than once is redundant. Alternatively, letting them draw cards might be irrelevant if you just want to flood HQ. (So ideally play this in a deck that always wants to draw.) Or maybe you don't care if they take any of their trashed cards back for some reason.

The subtle flaw: As the rules stand today (April 2018), the third subroutine is mandatory. Sure, you may choose to shuffle 0 cards from HQ into R&D, but that still shuffles R&D. For example, when Jackson Howard was around, you could choose to use him to "shuffle 0 cards in", just to shuffle R&D, as per this ruling. That was great when you had control over the effect, but now it makes NEXT Sapphire a very dangerous piece of ice to put on R&D, or potentially on the outside of a server, since it gives the runner the power to shuffle R&D, whether that's to see a fresh card off the top or because they want to stop you from drawing something they've seen.

(The Devil and the Dragon era)
EnderA 491
I would just like to comment on the shuffle - it plays havoc with runners who like to Index RandD :) — lunchmoney 13 Apr 2018

I think the main weakness it has it's that it's subs aren't THAT bad for the Runner, so it's basically a 4-rez 2-str code gate the Runner can sometimes ignore. Maybe the designers meant it to be just a support for other NEXT ICE?