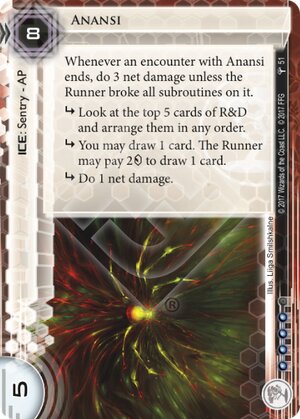 Whenever an encounter with Anansi ends, if the Runner did not break all subroutines on it, do 3 net damage.

subroutine Look at the top 5 cards of R&D and arrange them in any order.

It's been over two years since the last review. Anansi has gone from merely being "very interesting" to "all over the place, please send help" and a candidate for the best piece of ICE in the game. Generally speaking, it's a 3-of in any Jinteki deck that can afford to rez it, and my deck-building process for Jinteki decks nowadays starts by putting in the agendas and three Anansis, and then thinking about the rest of the deck (and about what sort of economy it needs for rezzing Anansis to be a reasonable option). It's also probably a large part of the reason why, in top-level play, glacier decks tend to be run out of Jinteki nowadays.

So why is it so dominant? There are basically only three ways through Anansi:

In other words, this is not a piece of ICE you can run through repeatedly by any reasonable means. If Anansi is on a central server, then any run through it has to be very high impact in order for it to be worthwhile. Take an event like Diversion of Funds; that's a double which produces a 9 swing (5 gained, 5 drained, 1 to play the event), one of the largest swings in Standard. Now imagine running a Diversion of Funds through an Anansi; you're paying around 7 to break it, so you made a net gain of 2 if you don't count the cost of playing the event, or broke even if you consider that you could have clicked for 2 with the clicks you used to play it (and you probably had a better use for those clicks anyway). This means that as soon as you have an Anansi rezzed on a central server, it's effectively safe from anything short of a giant The Turning Wheel run, or a Legwork run when the Runner already knows there's an agenda or two there. The cost of running an Anansi simply isn't worth it when you aren't sure that there's something good waiting for you inside the server.

Counterbalancing this amazing taxing power is Anansi's 8 rez cost. But the rez cost is only 8; most highly taxing ICE is more expensive than that. (I was going to put a list here of similarly taxing ICE to an Anansi, but ran dry on comparisons; there simply isn't anything that taxes quite like an Anansi. ICE with comparable break costs include Wormhole which requires more support, Chiyashi which costs 12, and Susanoo-no-Mikoto which costs 9 and is way more vulnerable to Boomerang.) This also, importantly, means that Anansi is cheap enough to plausibly rez on turn 1; a very common turn 1 play for Jinteki decks is to ICE HQ and R&D and play Hedge Fund, and now aggressive runners are stuck because you really don't want to run into an Anansi on turn 1. Anansi is thus comparable to Hard-Hitting News in that it invalidates entire Runner deck archetypes, by making early aggression incredibly risky. Just like an NBN deck might not necessarily have the Hard-Hitting News, a Jinteki deck might not necessarily have the Anansi; but the Runner has to respect the threat, and so the mere existence of Anansi keeps you safe even if you don't draw it.

The main drawback of Anansi is that it doesn't actually stop the run. When the Runner hits it (maybe as a facecheck), things are going to suck for them, but they may as well continue the run after they do; they're going to have to slog through the Anansi no matter what, and the run will still be going afterwards. This doesn't matter all that much if you place the Anansi on HQ; a face-checking Runner will get one random access there, which is the sort of thing that Corp decks are used to (and maybe you can draw a Snare! off the subroutines). It matters even less with an Anansi on R&D; if the Runner can't break the subroutines, it will protect the top of R&D for you.

However, it is the reason why you mostly only see Anansis in Jinteki decks. With a piece of ICE this good, you don't really want to have to limit its versatility by putting it on a particular server. I've experimented with Anansi out-of-faction, in decks which want out-of-faction ICE (and that can afford to pay the rather large influence cost), and although it works fine on centrals, it has too much of a tendency to be face-tanked if placed on a remote (this is often the cheapest way to "break" it). In Jinteki decks, though, reducing the number of cards in the Runner's hand by 3 might as well be an " End the run." subroutine; accessing a Jinteki deck's remote server is the sort of thing that you can typically only do with a full hand, otherwise you end up wasting a run on an Obokata Protocol or flatlining yourself on a Snare! or Project Junebug. So this is basically the perfect example of a piece of Jinteki ICE; you need the 3 net damage to be meaningful before you can put it just anywhere, but if it is, its stopping power is very comparable to its taxing power.

There's one other strategy with Anansi that's easiest to explain by looking at its break costs with common breakers:

And just for fun, a selection of some not-so-common breakers:

The pattern's a little hard to spot, but: among common breakers (other than Aumakua), if they can break Anansi cheaply, they get more expensive if there's another sentry on the same server. Ika costs money to move back and forth. Bukhgalter's discount applies only to the first sentry broken each turn. Afterimage ends up draining the stealth credits faster than they replenish, and Engolo can't break more than one sentry per turn without help from another card. This is another reason that Anansi works better in-faction; Jinteki has a lot of good sentries, and pairing another decent sentry with an Anansi is a quick and easy way to make a nightmarishly expensive server that's only moderately expensive to set up.

Above, I said that the main drawback of Anansi is that it doesn't actually stop the run. It has another main drawback, too: as with almost every card in Netrunner, you can only run three of them. Most decks want a lot more than 3 of the effect. If you're reading this review, you may be thinking about playing Anansi and wanting more; so it makes sense to mention some "second-best" options that can emulate Anansi in different respects, in case one fits your deck:

And in other factions:

In summary: Anansi is basically the perfect piece of ICE for central defence, and is well worth its rez cost (which is high, but not unusably high). Its effectiveness on remotes rather depends on what impact "pay 2, draw a card, take 4 net damage" has on the runner; when you play Anansi in-faction, that's effectively going to end the run (and make Anansi just as good as on the centrals), but in other factions the Runner might not care as much. In any case, it is basically the dominant piece of ICE for Jinteki decks nowadays, making early facechecks (even more) unwise against any red deck that has 8 to spare.

A very interesting ice, both in its subs and everything else. Let's take a look at it.

First off, the bad. It does not end the run and is therefore pretty porous. Not unheard of in Jinteki though. It also has a pretty respectable 8 rez cost, which means it has to be compared to DNA Tracker, an ice that has been a staple in Jinteki decks every since its release. Also, 4 influence, so pretty hard to splash.

That's it really. On to the great.

This card is up there with DNA Tracker, Komainu and Chiyashi as one of the absolute worst jinteki ice to face check. Not only does it give the corp a chance to stack R&D in their favor, it also deals 4 net damage. If you ever had any desire to just run servers without a sentry breaker against Jinteki (you brave fool), you should definitely reconsider.

The real kicker comes in the fact that the 3 net damage is not a sub, but an ability that fires IF the runner did not break every sub on this card. That is amazing, because while low on money the runner might be inclined to just let the corp draw one and/or take 1 net, and just break the R&D sub. But because of this, the runner really has no choice but to break this every time, unless they want to lose 3 cards every time they go through this.

Not only that, but some of the best ways to deal with expensive ice are ineffective against this card. Want to use Security Nexus? Take 3 net damage. Femme it to bypass? Take 3 net. Lustig? Take 3 net. Inside Job? To the heap with those cards.

And to add icing on the cake, this is not a "when encountered" ability, so Hunting Grounds does nothing against this,.

So what it comes down, is that there really is no cheap way to deal with this card. The only breaker that goes through this for a reasonable amount of money is Switchblade, a card never seen outside of Ele "Smoke" Scovak: Cynosure of the Net. So your options are paying through the nose to get past this, or lose a significant portion of your grip. Or use Golden to derez it, but then you're... playing Golden.

This card will definitely find a home inside of net damage decks, and become (nearly) as popular as DNA Tracker.

(Council of the Crest era)
Cpt_nice 1325
4 continues to be a very unlucky number for the Runner (Snare!, Neural Katana) while 8 is becoming more and more of a lucky number for the Corp (DNA Tracker, Anansi, Wall of Thorns). Coincidence? I think not. — BlackCherries 30 Mar 2018
Also, 4 net damage if you faceplant a Cortex Lock with zero breakers! — Cpt_nice 30 Mar 2018
Just another card in the long-running joke that is A:NR. — LynxMegaCorp 30 Mar 2018
And shouldn't this be unique? — LynxMegaCorp 31 Mar 2018
Anansie: Stopping runner's hedonism (Just Because They Feel Good) since 1996. — Hongkong Koma 13 Apr 2018