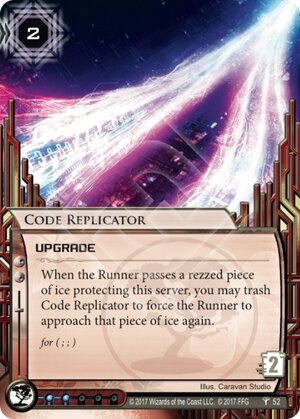 Whenever the Runner passes a rezzed piece of ice protecting this server, you may trash this upgrade. If you do, the Runner must approach that ice again. They may jack out.

for (;;)
Illustrated by Caravan Studio
Decklists with this card

This card is basically just to tax the runner a bit more, preferably with an expensive piece of ice. If a breaker like Gordian Blade is breaking a DNA Tracker, then it would cost the runner 7 credits. Subtracting the card's rez cost equals a credit advantage of 5 credits in that scenario, better than a Hedge Fund, which gives a 4 credit advantage.

One synergy to mention is Komainu, which does not lose its subs until the run ends.

(NAPD Multiplayer era)
Apex Predator 27
While the synergy with Komainu is notable, it will never lead to a flatline as the Runner is given the opportunity to jack out after Code Replicator fires. In addition, that means Code Replicator must be pre-rezzed (so that it triggers on-pass) losing a bit of its surprise factor. While this takes away from its ability to be a menacing kill option, it's a very strong taxer as you mentioned. — BlackCherries 10 Sep 2018
However, I'd suggest you compare it to a similar-gameplan upgrade next time rather than Hedge Fund. Comparing Code Replicator to Marcus Batty/Bio Vault/Embolus would be more appropriate. — BlackCherries 10 Sep 2018
You are right. An even better comparison would be Red Herrings. — Apex Predator 10 Sep 2018
I will edit it, eventually — Apex Predator 10 Sep 2018