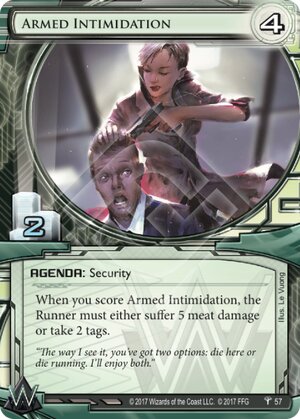 When you score Armed Intimidation, the Runner must either suffer 5 meat damage or take 2 tags.

"The way I see it, you've got two options: die here or die running. I'll enjoy both."
Illustrated by Le Vuong
Decklists with this card

When you think of Weyland 4/2’s, not many pop into mind – Oaktown Renovation probably sees the most play (unless you’re a firm believer in the conspiracy theory that says Corporate Sales Team was printed without its green colour). However, Armed Intimidation should be right up there in contention with Oaktown as the de facto Weyland 4/2 given the release of Scorched Redux. With it in hand, and the runner on 3 or less cards, this becomes a 5/2 that says “win the game”.

Of course, it’ll never be that easy as it’s not an agenda counter – it has to be triggered the moment it’s scored. In addition, it’s not self-defending and its ability can be countered by damage prevention or tag avoidance. In fact, it’s as if the agenda was built to be hard countered by On the Lam, which still sees some play in the current meta.

Despite this, don’t be afraid to just slam an Arm. In. anyways even if you don’t have the combo tools ready to go or the runner is being cautious of hand size. The ability is still a significant tempo loss for the runner, especially in the early game before they’re set up. For those not running tag punishment, you may not see the full value of this card. However, given that decks like rush Argus (ala Lobstermodernism) are quite prevalent and are doing well, this card deserves a good look.