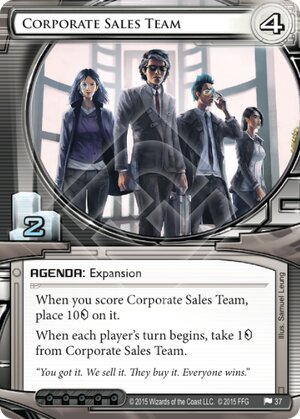 When you score Corporate Sales Team, place 10credit on it.

"You got it. We sell it. They buy it. Everyone wins."
Illustrated by Samuel Leung
Decklists with this card

One of the biggest challenges for Corps in Netrunner is that while scoring Agendas helps them win the game, doing so involves investing quite a few clicks and credits that can weaken their immediate board position. For example, after a Corp has scored an Agenda is often the ideal moment to begin a Siphon Train, or make a run on a server with some unrezzed ice.

Not surprisingly, it follows that Agendas that give the Corp clicks or credits back can be pretty good. In the past we've seen this area explored by Hostile Takeover (great), Corporate War (hard to use), Efficiency Committee (poor return), Geothermal Fracking (a lot of bad pub) and Oaktown Renovation (amazing!), Advanced Concept Hopper (excellent).

This new agenda, Corporate Sales Team, probably compares best with Corporate War, as they both are neutral 4/2 agendas, and give credits back without any bad pub. Corporate War would be a good agenda ... except for how you need 7 credits on hand when scoring it. And the real catch is you don't just need 7 credits, you also need 4 credits to advance it, and probably credits to rez ice or upgrades to defend it, meaning you actually need 15-25 credits on hand when you are going to try to score it.

Corporate Sales Team has no such requirement when scoring it, and gives the Corp 10 credits, 3 more than the War. The catch is that it gives the credits back more slowly as drip econ. Note that it gives a credit at the start of each players turn though, so this is pretty fast drip. It's like having a Pad Campaign that fires for your turn, plus another that fires for the Runner turn.

Corporate Sales Team probably isn't quite as good as Oaktown or Hopper, but it does seem pretty strong overall. If you're making a Jinteki or NBN (non fast advance?) deck, it'll be the best econ return agenda available to you, and of course you may include this alongside Oaktown or Hopper to build a critical mass of agendas that pile on economic advantage.

I've been playing a variety of rush decks recently (that is, decks for which at least part of their strategy is scoring out behind a small piece of ICE, before the Runner finds an appropriate icebreaker for it). When you're playing a rush deck, you want:

Given what card this review is being written on, you can probably guess at the solution to the problem: hey, wouldn't it be great if there were a 4/2 agenda that clicklessly generated 10 credits? Corporate Sales Team has been simply amazing in my rush decks; it's a 1-card economic engine that gives you almost all the economy you're going to need in a short game, and it does so with no relevant costs at all. You are going to put 4/2 agendas in your deck, because you kind-of need them to win the game. You are going to advance them and score them (or the deck loses regardless). And that is the only cost that needs to be paid to use Corporate Sales Team; there isn't even an influence cost, so you can do this in any faction and with no deckbuilding restrictions (it even helps fulfil the agenda point requirement!).

Just to give some idea of the power of this card: recently I was speculating about "how much influence would a neutral 45/x ID with no ability need to be balanced in Standard", and decided as a joke to build a 45/0 deck to see what happened (with no actual blank 45/0 identities in standard, I simulated it by using New Angeles Sol: Your News together with only neutral cards with no influence cost). My turn 1 was Vanilla, install Corporate Sales Team, advance it. On turn 4, I scored a second Corporate Sales Team. On turn 8, with the help of a Fast Track to sneak an agenda past the opposing Stargate (and a bit of luck when a click 3 Stargate revealed two agendas as the second and third cards, allowing me to basic-action-draw one because the Runner couldn't trash them both nor trash the card on top and steal them both), I had scored out. This was, of course, a completely fluke win that's unlikely to be replicated in a tournament, but it was only remotely possible because the Corporate Sales Teams provided enough economy for the entire game between them.

The main competitor to Corporate Sales Team (update: prior to the printing of System Gateway; see the discussion of Offworld Office below) is Oaktown Renovation. There are two primary differences between the cards. Oaktown Renovation has the slight downside of producing only 8 rather than 10 if you advance it normally (i.e. clicking for AAAA); however, it also has the relevant upside of producing those credits while being advanced (rather than spread out over the next 5 turns after it is scored). Oaktown Renovation also has the downside of your opponents knowing for sure that it's an agenda, but in a rush deck, that typically doesn't matter much. That said, trying to decide which is better is pretty much pointless. If you are building a rush deck outside Weyland, you can't legally run Oaktown Renovation anyway, so the decision has been made for you. If you are building a rush deck in Weyland, you can and probably should simply just run both cards; you're probably going to need 10 agendas, after all.

Although this review primarily focuses on rush decks, Corporate Sales Team is also playable even in other deck styles (it's also worth noting that the cards needed by a rush deck don't come to 45 slots, so most rush decks will use their remaining slots to implement a backup plan, perhaps transforming into fast advance or glacier to get the final few points through if their early run falls short, so it's nice if your rush agendas can help you with your backup plan too). A clickless 10 might not be sufficient for your deck's entire economy if the game lasts beyond the first 8 turns, but it definitely doesn't hurt; many Netrunner games end up being decided by only a few credits, so a 10 swing is easily enough to have a decent chance of swinging the result of the game in your favour. Generally speaking, it works best in decks for which credits are the main limiting factor (as opposed to, e.g., being short of clicks, or where the deck aims to attack some resource of the Runner rather than gather resources of its own); although it's good anywhere, the opportunity cost starts to add up if there's some agenda that might fix your deck style better.

If you're considering putting Corporate Sales Team in your deck, here are some similar agendas you might want to consider using alongside it or instead of it:

Also worth noting is that the various faction-specific 3/2 agendas are, in effect, 4/2s that costs , 1 less to advance (and Project Atlas and Project Vitruvius can alternatively be scored as a 4/2 with a bonus ability, with Atlas's being particularly helpful for rush decks). So although the 3/2 stat-line is more associated with fast advance decks than with rush decks, 3/2s often make for a worthwhile substitute for economic 4/2s when you're planning to rush, as they save you just that little bit extra.

In summary: if your deck is planning to win fast, Corporate Sales Team is pretty much the perfect agenda to score on turn 2, and will probably fix your economy for the entire game; you are likely to want three of them in your deck to increase the odds of seeing them early. If you're planning on letting the game go a little longer than that, it's still good, but will have more competition, and might end up not meriting the deck slot (and/or messing up your agenda point distribution, which in some decks is very constrained).

Amazing review. Very thorough. I agree with everything. Of note, this agenda is now viable because PAD Tap is banned (this is more a historical note, for newer readers).