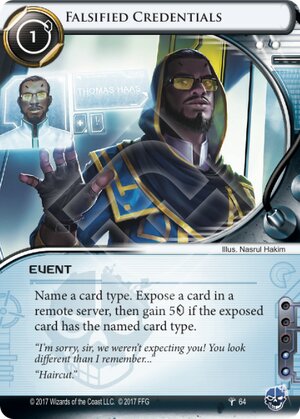 Name a card type. Expose a card in a remote server, then gain 5credit if the exposed card has the named card type.

"I'm sorry, sir, we weren't expecting you! You look different than I remember..."
"Haircut."
Illustrated by Nasrul Hakim
Decklists with this card

But have you ever stopped to consider the flavour and card mechanics together..?

“I’m sorry, sir, we weren’t expecting you! As our regular security protocol goes, can you answer what the capital purchases in Sector B-007 are for?”

“…Sounds good to me. You’re cleared for authorization to the purchasing card. Oh and by the way, it was our NGO Front in Sector B-007 but you obviously knew that, right sir?”

“Sure, of course. Oh and don’t mind if you see some casino expenses pop up on the purchasing card, thanks.”

Nobody's ever seen Thomas Haas at the office -- even his own company doesn't employ his services -- so who would really know what he looks like anyway? :D

"That just sounds like Sure Gamble with extra steps".

Falsified Credentials is a strong card that fills an interesting design space. Exposing has never been a fully explored mechanic but now with the release of 419, it will definitely be all over the meta for a while. At the very worst of times, this is an Infiltration for 1 credit, which is bad but not nearly as bad it sounds. NGO Front is everywhere nowadays and with the rise of 5-3 agendas, knowing if that advanced card in the remote is worth running or not, is invaluable info to have.

But that's the worst case scenario, outside of exposing a Psychic Field. If you guess correctly, you gain 5 credits, which is a Sure Gamble level return. And we all know how strong that card is. So you will obviously want to guess correctly. In 419 or Silhouette decks this card is obviously bonkers, as you will be able to guess with enormous accuracy. Not only that, but this card combos extremely well with Aumakua, giving you a virus counter regardless of your guess. But even if you don't play an expose oriented deck, if you have some knowledge about the kind of cards your opponent would play in their ID, you can still make an educated guess and be rewarded for it.

Does that make it worth the influence in non-criminal decks? Probably not, but it is definitely a great card to have in the pool and it can be extremely powerful in the hands of a player with meta knowledge.

(The Devil and the Dragon era)
Cpt_nice 1707
I like this card, expose has been a fun mechanic since Core Set days. The problem is there could be scenarios where this card becomes a dead draw - FA decks or asset spam (where they're content to rez their assets prematurely). It'll be interesting to see whether players start pre-rezzing cards in anticipation vs. Sil/419, similar to Drive By's effect on the meta. — BlackCherries 20 Apr 2018
I like this card too. It's mere existence along with what I believe will be a strong prevalence, will be a strong counter-measure to Mushin and NGO. The corporation has to decide whether they should slot these at all. — quailman2101 20 Apr 2018
Let's not forget, that if you have [Zamba](/en/card/21003) installed, you will get 5 Credits, making this even better than sure game, while demanding only 1 credit. This is a very strong card that does so much. — Infectiou 22 May 2018