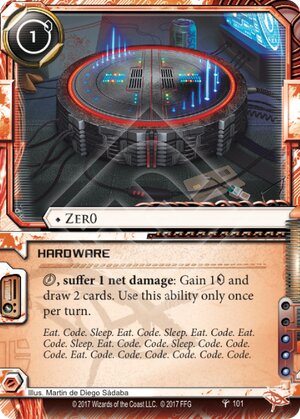 click, suffer 1 net damage: Gain 1credit and draw 2 cards. Use this ability only once per turn.

Zer0 is obviously great for self-damage decks. Not playing against thousand-cuts Jinteki or tag/bag Weyland? No problem! Just Zer0 to charge Clan Vengeance and ruin the Corp's day. Unlike previous self-damage options such as Amped Up, Titanium Ribs, Brain Cage, and Stim Dealer, Zer0 not only avoids the permanent repercussions of brain damage, it also lets you stay in the game by gaining 1 and 2 cards each time you click it. Brain damage also does not fire I've Had Worse, but Zer0 synergizes beautifully. Damage is of course dealt randomly, so just wait until IHW is the last card in your grip, click Zer0, and BOOM! 1 and 5 cards. This is one of the best single-click power-draw moves in the game right now.

It's 1 to install, is a piece of hardware so is generally safe from the Corp and won't cost you any memory space, and is NOT a console, so you can still one of those, if you're so inclined.

Influence is a bit steep at 3, so I don't really see this being played outside of Anarch. The self-damage archetype usually wants to run 3 IHW (2 inf each for a total of 6 inf), and it definitely will with Zer0 as they combo so well together. But, self-damage also generally wants at least one DDoS (3 inf each) to ensure they can get into Archives and get all those juicy agendas that were hopefully trashed after popping Clan V (another 4 inf each). Too much to export this game plan.

So which Anarch ID should you run this out of? MaxX: Maximum Punk Rock seems the best choice, as her self-trashing draw ability means you go in planning to miss a bunch of cards and have to recur them or use Levy AR Lab Access to start over. Self-damage is just another drop in the bucket for MaxX. I also enjoy the mirror image of MaxX's ability with Zer0's: trash 2 cards to draw 1, then trash 1 to draw 2. If you thought MaxX was fast before then you need to read the flavor text on her card again.

The only real downside to Zer0 is that you can only use it once per turn, and therefore can't go completely bonkers with Clan V immediately after installing it. This is probably good for balance, and it's also fun to watch the Corp squirm as you build up Clan V. The fact that it's unique and you can only have one installed at any given moment isn't really a negative - cards that are considered "dead draws" in any other deck just become more tinder for the fire in self-damage. Happy self-damaging!

(Kampala Ascendent era)
Ziggy4Ark 4
Special shout out to Synthetic Blood, a resource that works well with the self-damage archetype, Zer0 specifically and has the exact right cost for Career fair. — Severijn 15 Jun 2018
While I think everyone can agree this card is absolutely great in self-damaging decks, what about other Anarch decks? What are everyone's thoughts? I personally think given that IHW and the conspiracy breakers are such a staple that Zer0 still works well in any generic Anarch deck. — BlackCherries 15 Jun 2018
I have been thinking about that. This card's effect is very similar to Professional contacts. You do need a bunch of redundancy to consider it, so it might be good in Maxx, or in a paige piper shell. — Severijn 16 Jun 2018
Zer0 is wonderful with Titanium Ribs and some Synthetic Blood as the cherry on top of the cake! Helps draw pieces with so much control and powers up Clan Vengeance in no time. — supercatfish 24 Jun 2018