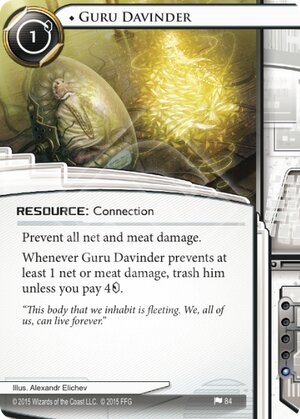 Prevent all net and meat damage.

Whenever Guru Davinder prevents at least 1 net or meat damage, trash him unless you pay 4credit.

"This body that we inhabit is fleeting. We, all of us, can live forever."
Illustrated by Alexandr Elichev
Decklists with this card

Has anyone figured out how this card is useful yet? It's obviously a powerful effect, but seems harder to use than most damage prevention tools. What distinguishes Davinder:

Those attributes don't set Davinder apart very much. Running down a few other commonly-used alternatives:

Given the spread of available options, I don't see Shapers turning to Davinder much, and it's unclear in what situations Davinder is superior for other factions, too. The most obvious synergy is also present in The Liberated Mind with the new grip-less Anarch archetype encouraged by The Noble Path & Emptied Mind: run with an empty grip, work around damage with Davinder. But is it worth spending even a single influence • when a) brain damage could still flatline you (facecheck an Ichi 1.0 when the corp has more credits? You're dead), b) there are other options that don't cost influence, & c) Davinder is outrageously expensive?

If we think of corp archetypes that use both meat and net damage, Davinder doesn't look terrible. Against Weyland supermodernism (which almost always packs Snare!), Davinder is reasonable yet still expensive, basically an upgrade over Plascrete Carapace only in that the Snare! net damage can be avoided. Against Personal Evolution (which often packs a singleton Scorched Earth), Davinder provides flexibility & hampers Ronin or Project Junebug flatlines severely. But there are far more decks that focus entirely on one type of damage & Davinder doesn't address those well at all, in particular being weak to cheap, small damage sources like Bio-Ethics Association & Traffic Accident. Meat damage decks always need to tag you first so they'll just trash Guru Davinder & then kill you.

The one use case that jumped to my mind: if you're doing a False Echo-DDoS type deck that builds to a ridiculous single-turn multi-Medium dig (see the Seattle regionals winner), then Davinder will absorb multiple Fetal AI & Snare! accesses in a way that's cheaper than Feedback Filter & more likely to ensure survival than I've Had Worse. But it's still a fringe application that requires a substantial amount of credits & spending an influence pip in a deck that's very short on them.

(The Liberated Mind era)
phette23 2261
I've been trying this with Emptied Mind in Quetzal. I put a ton of money cards in including 3 Stimhacks. And I imported Heartbeat to protect against a brain damage KO. Still not sure how good it is. Tags are the obvious problem. — quailman2101 5 Jun 2016
Other thing is that Davinder trades power for versatility. He can be one-shot or longer term protection, he can stop net OR meat damage, so in exchange he's not as efficient as e.g. Plascrete which is one-off meat damage protection. This means if your deck is already OKAY at avoiding flatline (Geist?) he can shore up the remaining weaknesses. — LordRandomness 5 Jun 2016
Mumbad City Grid a Brainstorm on a full hand with two other ice. By the third time you hit it, it has 15 subroutines. Bewaaaaaare. — Catsodomy 6 Jun 2016
Firstly the runner would be pretty insane to continue past Brainstorm after the crop rezzes Mumbad City Grid. Secondly Guru Davinder only works on Meat and Net Damage, not Brain, so I'm not sure what the relevance is. — Zakalwe 7 Jun 2016
@Zakalwe I think @Catsodomy was illustrating a situation where Davinder _does not_ save you :) — phette23 13 Jun 2016
@LordRandomness the Geist point is well-taken. Seems like Sports Hopper will always be better there. I just can't think of many decks where Davinder is the best damage-prevention answer. — phette23 13 Jun 2016
The other nice thing about running him in Geist is that he loves running Fall Guy, which can be used instead of a 4 credit payment to keep him from trashing after damage. As for Sports Hopper...eh, probably. This will probably hold up for longer though, if your economy is robust enough. — LordRandomness 8 Dec 2016
3

A major downside to Guru Davinder is that even in the optimal case where you can afford to pay out the ears to prevent damage, you can't steal Obokata Protocol (or an agenda protected by Ben Musashi.) If you expect that, but still want to play Davinder, you'll need either Film Critic or Whistleblower to get around the steal cost. Imp would let you put the agenda in Archives for a later steal, but isn't a permanent solution.

He's also much more efficient dealing with large packets of damage, such as Urban Renewal, Snare!, Psychic Field, City Works Project, or Punitive Counterstrike. Lots of small bits of damage will quickly consume your bank account, but paying to prevent 3+ damage could be well worth the cost. Worst case, let him trash himself and at least you prevented something.

Relevant Ruling: Nisei Comp Rules 1.15.1.b: The Runner cannot pay the additional cost to steal Obokata Protocol while Guru Davinder is installed, because the Runner could not currently take 4 damage if instructed to: Guru Davinder’s first ability would prevent the damage.

Guru Davinder is a permanent answer to (mostly) net damage as long as you have money.

Because he is a connection resource, it is important not to float tags or run last click. The frail old man definitely cannot be the only thing standing against Tag & Bag. At least, he helps against Argus Security, Weyland: BoN and Punitive Counterstrike. The Corp also has to spend an extra click to trash him, potentially avoiding a kill shot, but don't count on it.