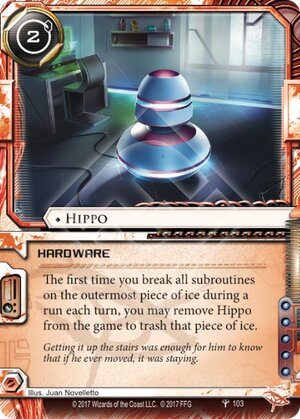 The first time each turn you fully break the outermost piece of ice protecting the attacked server during a run, you may remove this hardware from the game to trash that ice.

Getting it up the stairs was enough for him to know that if he ever moved, it was staying.
Illustrated by Juan Novelletto
Decklists with this card

What this should be compared to is Forked, Knifed, and Spooned.

Those cards are type restricted, which Hippo is not. If you just know you want smaller servers no matter what, then Hippo might be the way to go. If you are playing Quetzal with E3, then you might not want to use a barrier breaker at all and you need to ensure barriers don't get stacked, then perhaps play the cards that are barrier restricted instead, so they hit barriers no matter how deep you have to go to hit them.

I think most people are now of the opinion that 3x Hippo is more or less an auto-include in Anarch. Those other cards I mentioned are far from auto-include, though a lot of people still put 1-3 of them in their decks anyway so they only have to break a Chiyashi once or twice per game or something.

The best part about Hippo is how little thinking there is to be done. It only triggers in very specific instances, you just broke all subs on the outermost ice. That reduces the mental effort required to pilot such decks considerably. Anyone that has ever played a long and exhausting tournament can attest to how nice it is to devote less mental effort to each game with a more straightforward deck.

FWIW, I kinda agree with the design philosophy that led to Hippo, as in "These cuttlery cards aren't good enough. Type restricting is too much of a drawback.".

Five influence is the right number, because IMHO we don't want a situation where you can play the same deck no matter what ID you choose. I prefer a world where it feels different to play against an Anarch deck than it feels to play against a Criminal deck, and powerful 5 influence cards like these (and, for example, Diversion of Funds) helps the factions feel different from each other. Thumbs up on that influence call. Hippo is a really well designed card all around.

@Raiddinn , good review. You could also compare it to Chisel, Parasite, Trypano and Run Amok. Hippo has 2 drawback : in a glacier, you can put an insignificant ice on the outermost part of the server, because Hippo can trash only the outermost ice. Also, you can only have one on the board. Aside from that, I agree that every shaper should have Hippo, since it is the easiest ice trashing card to use in the game (but sometime, deck slots are tights). Now, if only the art could make sense for what the card does. Keep on making reviews. Cheers.

Its a nice designed card, powerful but with ways to play around it (smart ICE stacking, including ICE with unbreakable subs ect). The RFG feels like it was added at a later testing phase as it might turn out to be to good if recurable, which I would agree with. Still, as long as ICE destruction can be accomplished that easy and cheap, derezzing will never be viable in any faction.

Great card! Especially useful against Miraju and Kakugo out of Jinteki. Allows you to smash a Corp's piece of ICE for one click and two credits, plus whatever it costs to break. 5 Influence means that you'll never see this card outside of Anarch, and that's probably good. As of writing, this sees a lot of use, especially with Khumalo, Laamb, and Yusuf.

(System Core 2019 era)
Jthrevenge 17
It's important to note the downsides of this card as well - only works on the outermost ice and can't be recurred (a la Parasite). — BlackCherries 13 Feb 2019