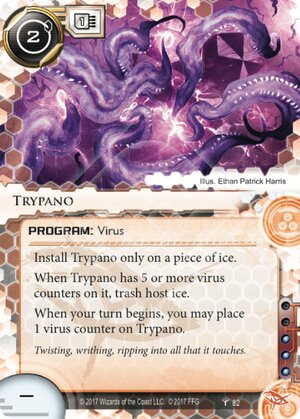 Install Trypano only on a piece of ice.

When Trypano has 5 or more virus counters on it, trash host ice.

When your turn begins, you may place 1 virus counter on Trypano.

Twisting, writhing, ripping into all that it touches.
Illustrated by Ethan Patrick Harris
Decklists with this card

Surprised that there isn't a review here yet. Lets fix that!

Trypano is weird, it looks like a bad, slow, Parasite, right? Well it's not a parasite, it ain't a Chisel either.

Here are the major differences:

The main problem of course is that ultimately the corp has the chance to counter it, Cyberdex Virus Suite and Cyberdex Sandbox are also not unusual picks, a desperate corp will lay down those 3 clicks, but anytime you pressure the corp into a round like that is a small win for you. In a program suite that includes other good targets for virus support like Conduit you might have some sort of plan brewing, just be careful not to overcommit, or else you might be the one feeling the tempo hit rather then the corp when it purges.

I think this card shines best as a 1 or 2 off with a bit of tutor support, try it in a deck with Gachapon!