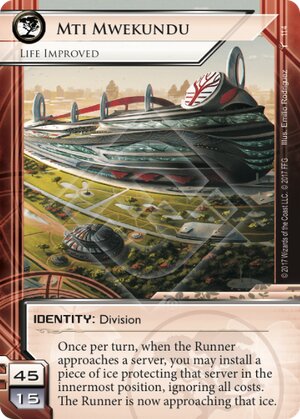 Whenever the Runner approaches a server, you may install 1 piece of ice from HQ in the innermost position protecting that server, ignoring all costs. The Runner moves to that ice and approaches it. If this is not the first time they have approached a piece of ice this run, they may jack out. Use this ability only once per turn.

Just a glimpse into what it was like to play while Mti was legal:

Playing as our lord and savior, Mti:

This is my favourite review on all of nrdb

You get a free click most turns to install an ice, on exactly the server which needs it most, knowing what breaker options the runner has available, and you can rez it without the runner having a chance to jack out (if it's the first ice). Any one of these would have been very good. Together they are amazingly strong and completely upend whatever early plan the runner had in mind.

Every other ID has to install ice in advance. If you draw 0 ice, the runner will see that you are exposed and act accordingly. If you are a Mti that has drawn no ice, the runner still has to assume that you have a devastating option in hand even if you haven't installed it yet. If anyone else has drawn 1 ice, you can use it to install exactly one server. Mti can use a single piece of ice to guard against attacks on any server.

Mti gets an astronomical amount of tempo from being able to threaten whichever ice of Komainu/DNA Tracker/Cortex Lock/Anansi would ruin the runner at this particular moment. Running on Mti early is extremely dangerous. Late game, they have more ability to cheaply throw around Border Control than anybody else (click-free, no install costs).

Mti also gets unusually strong tempo from normally high-risk plays like Mushin No Shin and unguarded assets. It is EXTREMELY hard to contest early Mti Mushins. It is also very hard to land a meaningful Account Siphon on Mti -- they will always be better protected than they appear, and may or may not be able to install an ice they can use to bankrupt themselves. So your Account Siphon's value may be limited to "make an expensive run to cause the corp to rez enough ice to become poor", which is MUCH less than you hope for Account Siphon in most matchups. Or they might install a Border Control and end the Account Siphon altogether.