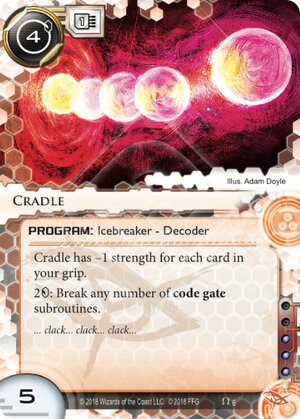 This program gets -1 strength for each card in your grip.

A far more interesting and balanced decoder to its predecessor, Yog.0, Cradle is the newest Anarch fixed-strength decoder with a condition that can end up being quite the hindrance: modified icebreaker strength based on current grip-size. Shapers and Criminals have plenty of options at breaking code gates with Gordian Blade and/or Abagnale so I think I can safely say this won’t be seeing play outside of Red.

While cheap gearcheck ICE like Enigma or Thimblerig have been the bane of Black Orchestra for a long time, Cradle eats those two up for breakfast. Unfortunately, the presence of the big 3-subbed code gates: DNA Tracker, Fairchild 3.0, and Mausolus make Cradle a liability. Without strength modifiers, a runner would need an empty grip to break the latter two (after which they would commit neural suicide on a potential Kakugo) and suffers a painful facecheck against the former.

I see two potential options then to playing Cradle: using strength-modifiers and grip-size-managers like Dedicated Processor and Patchwork respectively or consistently maintaining a near-empty grip to keep up Cradle’s high base strength. It’s a high upkeep for a card that no longer says "0: Break code gate subroutine."

While previous Yog.0 decks only had to worry about boosting the decoder’s strength up, decks utilizing Cradle have to worry about that and keeping its base strength manageable through their grip. Outside of Gnat or Noble Path decks, I think this card’s strength-modifier keeps it from seeing any competitive play.