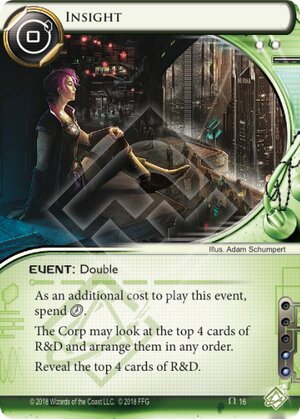 The Corp may look at the top 4 cards of R&D and arrange them in any order.

Reveal the top 4 cards of R&D.

This card has some similarities to Indexing, in that you get to see the top cards of R&D (4 instead of 5) and decide whether it is in your best interested to go in to snatch an agenda. Contrary to Indexing, you don't actually have to make a potentially expensive R&D run to get to see the cards, it will cost you zero credits and 2 clicks instead.

The glaring issue is that you are not stacking the cards, the corp is. If there happens to be an agenda in the 4 revealed cards, the corp can choose to bury it. If there is no agenda, the corp has a chance to stack R&D in their favor, an underrated yet powerful effect. At least with Indexing, even if you whiffed, you could still give the corp useless cards and put their Rashida Jaheem or Hard-Hitting News at the bottom. And they would have no idea which cards are coming up, which if they do know gives them an advantage in formulating a game plan. This card does help the corp significantly. Also, seeing 4 cards instead of 5 does not sound like a huge difference, but imo that is deceivingly so.

Obviously this card is meant to be used with Top Hat, and if you happen to run these two together, your R&D access will be like super precise sniper fire. And IF the corp has a ton of expensive ice on R&D, the disadvantages of this combo potentially are outweighed by the money you save. Does that make it better than just running Indexing though? I am not convinced, but I have been wrong before, so time will tell.

As always, be watchful of Mirāju. It will F up all your R&D sniping dreams. Best stick with The Maker's Eye or Deep Data Mining if your meta is fond of said ice.