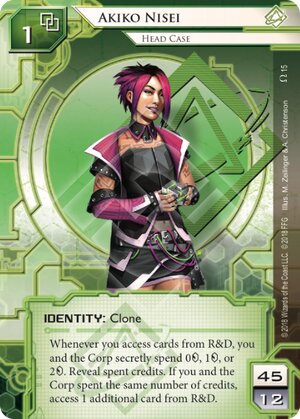 Illustrated by M. Zeilinger A. Christensen
Decklists with this card

Here's a bit of lore from The Worlds of Netrunner, page 73, "There were two Nisei clones before her, and what became of them is uncertain. As you might already know, Jinteki often names its prototype clones alphabetically, so Caprice must be the third of her line.

I am not the world's best Akiko player or anything, but I wanted to offer a different take on her than that in the other reviews.

By using her, you are kinda sorta pre-installing a R&D interface with all that entails. You don't have to put 3 of them in your deck in order to make sure you can R&D multi-access. That frees you up deck space for other stuff.

Rather than doubling down on R&D pressure, like with adding multiple R&D Interfaces when you are already playing Akiko, I suggest not trying to go for the deep dives on R&D. Play a few indexings, maybe, because you probably won't hit more than 2 agendas in 5 cards anyway, and just let the corp overcommit resources to defending R&D while you focus on other things like ensuring that you can get into the scoring remote when needed. Maybe play some legworks and run against HQ.

The more they spend trying to turn off your ID, the better for you because that makes other stuff less well defended.

If your ID triggers, bid zero 66% of the time and bid one 33% of the time. That should encourage the corp to spend a fair number of turns bidding 2 and go a long way toward preventing yourself from bidding higher than them. They should have to pay if they want to turn your ID off.

Also, don't shuffle up without including 1 or 2 copies of Psych Mike in your Akiko decks.

DO play Equivocation with her. That's a great cheap way to make the R&D runs you do go a lot farther. Make them draw whatever is not an agenda every time so your 1/2 accesses are a lot more likely to hit agendas. It's worth it.

I think there is a good general principle here. Many Runner cards make successful runs more impactful, but in most cases it is the Corp who ultimately dictates which server is harder to get into in the first place. Therefore it is good for a Runner deck to have the ability to pressure both R&D and HQ when the opportunity arises.

Much as I love Akiko, I suck at playing her. Main reason why is simple: I focus too much on R&D multiaccess. Can you really blame me, though? Her ability rewards you for running R&D. Unfortunately, as soon as the Corp sees everyone's favorite Shaper clone, all the ice goes straight to R&D.

So why do I love Akiko? 1 is a good tradeoff for 3 less influence than average for a minimum of 45 (Jesminder and Lat, for example, are 45/15) and her ability. Discounting the events Push Your Luck and Rigged Results, this is the only Runner psi game, and it leads to a lot of fun combos. Psych Mike and Mind's Eye combo off of Akiko easily with multi-access. I think Akiko is best matched against horizontal decks as opposed to vertical decks; if you go broke getting past that last sleuth at 221B after fighting off a particular killbot, you'd better have a couple of desk bugs installed for the multi-access.

Akiko is fun to play with, but difficult to get right. Kit's another favorite of mine who can be piloted by a Gordian Blade, even with less influence. Smoke is part of the Stealth archetype and my preferred ID with her arsenal of stealth cards. Lat can be built around equality of numbers (Supercorridor and that damnable Khusyuk come to mind). If you can get an Akiko deck right, though, enjoy infuriating your opponent by stealing their GFIs, their Broad Daylights, their Government Takeover (if they're insane enough to run it)... The only problem I can't solve is whether or not an R&D equivalent of Sneakdoor Beta exists other than Divide and Conquer.