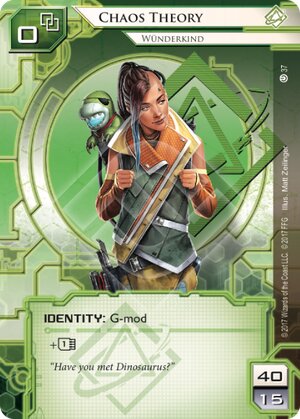 I think Chaos Theory is a great Identity. It is the Identity I have been trying to make work at tournament level for a long time.The main reason she doesn't always work for me is my deck building skills are not that great.

Chaos Theory: Wünderkind is a cool card with a cool name. The potential of a small deck size, only 40 cards, should allow the runner player to get the cards they need quickly. Her influence is normal at 15. Her ability is what you make of it, +1 MU. If she had more than 0 link she would be a killer.

When I make a Chaos Theory deck I always make sure my rig runs at the maximum MU of 5 (if unmodified). Why have the ability if you don't use it?! I don't always see the advantage of having 5 MU but I will squeeze another program in if I am ever under the maximum MU for her. The MU helps in the long haul. Once your rig is built it better be awesome or you probably shouldn't be playing this identity.

The point I really want to make is how she is similar to Andromeda: Dispossessed Ristie. Right now, in the meta-game, Andromeda is a very popular tournament winning Identity. Most major tournaments have competitors bringing a top tier "Andy" deck... just to be safe. I think Chaos Theory is the sleeper who will surprise everyone, especially as Shaper adds more cards. "Andy" lets the runner start with 9 cards and Chaos Theory only starts with 5 cards. BUT the cards remaining are "Andy" with 36 cards and Chaos Theory with 35 cards. This means Chaos Theory still has a smaller deck which allows the better runner player to cream their opponent. "Andy" forces the runner player to play cards or loose them their first turn. For "Andy" decks there is a hidden pressure to use your cards and clicks, or waste cards you put in the deck. Chaos Theory doesn't have this pressure. With 3 diesels I can pull cards into my hand when I need them and leave them when I don't need to use them. The click savings I use to make runs on the Evil Corporations.

The best starting hand for me is Dirty Laundry, so I can run on an exposed server. Then a Sure Gamble, if I don't score an Agenda. AND lastly Diesel so I can draw back to 5 cards and show the Evil Corporations that rocks!

Lastly Chaos Theory is Shaper. I love shaper . Card recursion and tutoring is how I play as a runner. Chaos Theory goes along with my play style.

I hope others see the greatness of Chaos Theory: Wünderkind that I do!

(The Source era)
Trewaters 24
Just a suggestion. If you have Diesel at the start of a turn with two other cards you know you want to play, it's usually a good move to play Diesel first. You never know what you might draw :) — mrdudesir 24 Mar 2015
Was this part of a creative writing excersize to review of Chaos Theory in the voice of Chaos Theory. Because it really nails the tone of a child hugging its teddy bear. — Glitch29 10 May 2015
I love CT. She's my favourite Runner. Some people swear by running her with a Mopus heavy deck, but I prefer two rabbit holes and a few Underworld Contacts, and a single Mopus. Rabbit Hole you can install both for a single click and 4 creds, raising your Link Strength to 2. 5 MU + Dinosaurus = full IB suite + Backdoor + Hyperdrive + Datasucker. Throw on a few All Nighters, and a few Three Steps Ahead. Cash, wanton destruction, potentially huge scoring opportunities and all sorts of ... well ... Chaos. Sure Dinosaurus isn't the best Console out there, but it's cute. Not 100% sure I'd bring it into a tournament, but with our gaming group it's way too adorable and fun to pass up. "Have you met Dinosaurus?" Damnit, I need to craft together a Dinosaurus card carry case now. Maybe with a stuffed toy outside, with a zip and internal case? — AdelaH 26 Aug 2015
Hate the flavor of this card. "Why do you run?" Anarch: "To take those bastard .1-percenters down a peg!" Criminal: "A man's got to make a living somehow. ;)" Chaos Theory: fart noise — bard88 27 Sep 2017

That's shaper in general. They do it just because they can and it's fun