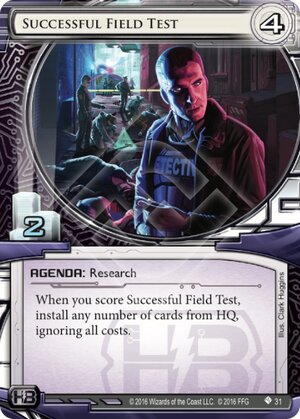 When you score Successful Field Test, install any number of cards from HQ, ignoring all costs.

Illustrated by Clark Huggins
Decklists with this card

There is so much going on in this card, I don't even know what to begin with.

Look at the art. A dark alleyway, plenty of dismembered, mangled corpses strewn around. Then the name - it's a successful field test. Field test of what? Is Bateman 1.0. finally heading into mass production? Sadly, no.

This scene in particular has been already described in Worlds of Android sourcebook. The simulant depicted in the foreground is Floyd, Haas-Bioroid's answer to Jinteki's poster girl - the first bioroid investigator to ever walk down these strange streets. Instead of latent psychic abilities, he sports extreme computing power located inside his chest, a connection to criminal databases worldwide and an ability to analyze samples in the field - all are perfect traits for a detective. There's just that one thing...

I mean, it's funny, considering the main plot of Terminal Directive is a renegade bioroid running on a murderous rampage. What Haas' cronies would do? Yeah - send in another bioroid to go after it. Come on, what could go wrong?

Another funny thing is, Floyd's with NAPD. Seidr's goal in Terminal Directive storyline would be to get to the truth about the murderer before the public does, and NAPD represents the public. With Floyd on the case, Seidr are essentially putting their own man in charge of the investigation. Floyd is a rat - hidden in plain sight and while some people certainly have their doubts, nobody seems too vocal about them. Of course the simulant is helping with the investigation, but how could you tell he isn't holding all the good bits to himself? Since this card now exists, you can quite safely say that indeed he does, and his creators are first to hear them.

But Floyd can have a hidden agenda too! As we know from the novel "Free Fall", NAPD's newest addition sports a somewhat peculiar interest in religion, even spending his free time and processing power turning a rosary in his chrome fingers, wondering what soul is and if he does have one (the former, as he admits, just in case he indeed had one). For Floyd, finding the murderer might prove to be a milestone for greater understanding of free will, of self, of spirit...

And what happens then? What if Floyd realizes how directives can be bypassed? What if he tells his kin? Maybe we're just one clueless philosopher away from a total war against the awakened machines?

Sadly, this piece's mechanics isn't at all that interesting - one thing worked, so we're ready to mass-produce and/or start many other projects. Information gathered by Floyd is giving you a headstart - but how does knowing that these poor folks have been mauled with a sledgehammer help you set up your naked men, power prostitutes or cyber babysitters? Feels like some ludonarrative potential was wasted there.

Is this card strong? Yes and no. With proper setup, it's excellent click compression and if you happen to have enough ICE in your grip, you can set up a five-layer glacier from scratch and save 10 credits while you do - and this is what it does best, as the only thing coming with an additional install cost is ICE. But most times you won't be able to do as much - an ICE or two on top of your scoring server might still help and save you some bucks you're going to need for a rez.

(Terminal Directive Cards era)
H0tl1ne 410
You are a treasure, H0tl1ne. Keep them flavour reviews coming. — Gargulec 4 May 2017
First things first: What a wonderful review. :) But don't undersell its power. It combos way too good with Estelle Moon. Score two points, spam some assets, redraw cards, get paid for it. Sounds good to me. — adquen 8 May 2017
Gentlemen, thank you for your input and for kind words of encouragement. @adquen: you're right, of course, but I dare say good old Shipment from MirrorMorph would do the same job better if you want to go asset spamming - you can launch it just off the bat, not having to score it earlier, which lets you get these tasty counters a lot faster. — H0tl1ne 8 May 2017
There's no reason to limit yourself to just 5 free ice. Try something like: Turn 1: Install, Advance, Advance. Turn 2: Anonymous Tip, Anonymous Tip, Biotic Labour, Advance, Advance, Score. Install 10 cards. — OrionJA 8 Aug 2017
9 Cards. Not 10. — OrionJA 8 Aug 2017
4

I was surprised to see only a flavor review on this card (at time of writing), as the "Tablet Asa" decks which exploit it were great in the 20.06 season and remain untouched going into the 20.09 season. There's even a decklist titled SFT is dumb.

So, why this card is good:

I could ramble on about how Cybernetics Court and Lakshmi Smartfabrics also help exploit Successful Field Test to its full potential, but that's really the main combo - make sure you can draw a bunch of cards the turn your score SFT, gain 6+ installs.