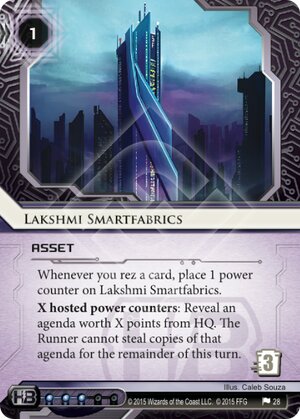 Whenever you rez a card, place 1 power counter on Lakshmi Smartfabrics.

X hosted power counters: Reveal an agenda worth X points from HQ. The Runner cannot steal copies of that agenda for the remainder of this turn.

Illustrated by Caleb Souza
Decklists with this card

0 hosted power counters: Reveal Domestic Sleepers from HQ. Repeat until the Runner gets bored and leaves.

Anyway, this can be a nice card for warming up your scoring server. You put it in there, rez an ICE or two in front of it to keep the Runner from trashing it, maybe rez some ICE over centrals or pop up something like a PAD Campaign in an empty server, then score your first Agenda by IAA-ing it and revealing a second copy. Of course, this relies on HAVING two copies already, so it shouldn't be a primary strategy. You can then just trash it to start scoring regularly in that server. As a bonus, if they unexpectedly get into the scoring server they don't even get any points.

It might be possible to ACTUALLY make it a primary strategy by having it occupy your scoring remote and scoring all 7 points this way, but be aware that you'll need beefy HQ protection since you're going to be holding a lot of nice stuff there. Cybernetics Court is probably a good idea in this case.

I know I'm leaving this message 6 years after you posted it but this card triggers itself on rez, so it will always have at least 1 power counter on it, which means you cannot do this trick with Domestic Sleepers.

Any card that says "the other player can't score points" is worth looking at.

Lakshmi Smartfabrics introduces an amazing new mechanic for constructing HB decks, particularly horizontal decks with many remotes. Thought purple was the only team not spamming assets? Maybe not for long...

Few cards have had "Whenever you Rez" triggers up to this point - Spark comes to mind, but not much else. These are powerful because of the "instant speed" at which you can trigger them.

Lakshmi fits well within asset- and upgrade- heavy builds (remember that Upgrade-a-palooza deck from the early cycles?), particularly with the following:

You might be skeptical about Lakshmi, but I guarantee you this is a must-trash card when you see it as the runner. It can pull off some incredible combos:

It may look janky on paper, but so did that spastic Hayley Cachemeleon deck, and that crap wins tourneys.

The absolute bane of this card is Film Critic. And Hacktivist Meeting. Because a lot of people run Critic, you gotta back this up with Snatch and Grab.

Also, I bet anyone 5 that Jesminder's Mirrormode clothes came from Lakshmi. Prove me wrong, bro.

(Business First era)
PureFlight 1047
Please note that incredible combo No. 1 doesn't work during a run, because of AALs restriction. You have to pull it off after the runner started their turn, before their first click. If you don't, the runner may just run the hopper first click and you can't pull off the combo since AAL can't be triggered mid-run. — Krams 30 Mar 2016
The problem with the horizontal Lakshmi plan is that the cards involved aren't actually that expensive to trash, because no ID gives them the added resilience, and Encryption Protocol only works in numbers. So how do you deter the runner from checking all the remotes and just trashing the key pieces is the question with this card. — enk 30 Mar 2016
Yeah @Krams, you're absolutely right. Let me tweak that language to make it more accurate. :-p — PureFlight 7 Jul 2016
2

If your opponent allows Lakshmi Smartfabrics to stick around long enough to acquire three power counters, you can use it to more-or-less fast-advance a 5/3: spend the counters to reveal the agenda, install-advance-advance, give the runner a single turn during which he or she can't touch that agenda, then advance-advance-advance and score.

Which means this is going to be a must-trash card.

But this card confuses me because (warning: I'm a newbie) because this asset makes ICE less useful, while also rewarding the corp player for having many assets, which can be rezzed at the corporation's convenience, making it easier to get counters on it. In other words, horizontal builds. And I was under the impression HB doesn't 'do' that. Even weirder, three influence means the factions that do have dedicated horizontal identities are unlikely to cater to it.

But hey, at least we finally have something to combo Test Ground with.

(Business First era)
Scrubsby 3
Test Ground already works pretty well with the Eve and Adonis campaigns, as long as you can protect them. — TheBytemaster 14 Mar 2016
From what I can tell from the rulebook, "for the remainder of this turn" would mean that "fast advancing" an agenda as described wouldn't work - the protection ends on the same turn the agenda was revealed from HQ, i.e. on the corp's turn. However, with two copies of an agenda, the protection could be activated on the runner's turn to achieve the aforementioned "naked scoring". Regardless, Lakschmi potentially looks useful as a Caprice/Ash variant (it's an asset though). — Sorden 14 Mar 2016
HB ETF can play horizontally. Well, HB ETF can play whatever the hell it wants to, but still. — Shieldwall 14 Mar 2016
@Sorden there is no reason to trigger this on your Corp turn, you would only trigger it durring the Runner's turn. — CapAp 15 Mar 2016
Actually, you would trigger in on the corp turn when the runner has Gang Sign out... — FarCryFromHuman 15 Mar 2016
@CapAp: Exactly. That's why the process described by Scrubsby 3 wouldn't work. — Sorden 15 Mar 2016
1

Leaving the dream... The Corp has :

Then, an unprepared runner encounters an unrezzed Architect.

The Corp rez Architect, reaches 2 counters on Lakshmi, spends them to show the Agenda in hand, and installs it when the 2nd subroutine triggers. Then scores next turn.

So Lakmish increases Architect efficiency by about 1.06, odds of Film Critic and Imp included. This, plus the utility as a partial distant HQ protection if fully setup, plus the combo that involves a pair of agenda in HQ. Definitely a card of choice for decks that are so good they can afford some jank for unlikely situations.

(Business First era)
Lupus Yonderboi 245
Note that LS rezzes with one counter put on it from its own rez. So the dream can be that you have it installed but unrezzed, so that the scenario can fire without the runner having any advance warning. (You do need 1 more credit so that the LS can be rezzed of course.) — michaeln 17 Mar 2016
Thanks michaeln. That makes LS a little better :) — Lupus Yonderboi 18 Mar 2016
Is there anywhere you can reference that LS is rezzed with a counter from its own Rez? I cannot find that ruling anywhere, and I can only imagine that the text on LS is inactive at the point that it was rezzed, only becoming active after that point. — Butler223 27 Jun 2016