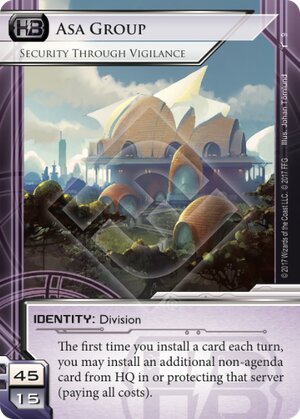 The first time each turn you install a card, you may install 1 non-agenda card from HQ in the root of or protecting the same server.

Illustrated by Johan Törnlund
Decklists with this card

None of these are Haas-Bioroid.
However... Asa Group: Security Through Vigilance allows you to both install a time bomb, and protect it with ice in the same action, allowing you to install and protect two time bombs in the same turn, each in its own server. This means that, until your time bombs go off, you have a pretty good idea of what the runner is going to do.

Either way, you MESS WITH THEIR MIND!!!

(Sovereign Sight era)
StarlightCrusade 97
You can't do two separate servers: gotta be the same one. Still, quite a powerful card. I'm imagining it more in rush decks, though. — eldest 29 Dec 2017
Click one: install a time bomb with an ice, click two install a time bomb, click three install an ice. — YankeeFlatline 30 Dec 2017
Anyone know if Asa Group's ability can be used on the runner's turn as well? Since it says "each turn" and not "your turn"? — BlackCherries 2 Jan 2018
It's the same 'the first time you install a card each turn' trigger that ETF had, so yeah, it can be used on both turns. Ultraviolet into Assembly Line into Asa trigger on your turn, discard, Assembly trigger into Asa trigger on runner turn -> install all the cards xD — Krams 3 Jan 2018