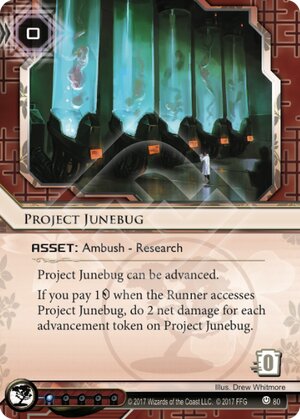 Project Junebug can be advanced.

Illustrated by Drew Whitmore
Decklists with this card

The advantage of using Project Junebug, over other ambushes such as Cerebral Overwriter and even Snare!, is the fact that it takes a solitary credit to fire it's ability. For the same amount of credits it takes to use Snare!, Project Junebug will cause double the net damage, enough to flatline a fully gripped runner. In metas seeing heavy Account Siphon and/or Vamp usage, and where the Runner won't run on remotes until the Corp has no credits, there nothing more frustrating the carefully laying out several traps only to not have the credits to use them. However, install Project Junebug behind a Pop-up Window and it doesn't matter that the Runner just Vamped your credits away. It is this low cost to potentially high damage that helps makes Project Junebug as dangerous as it is.

(Breaker Bay era)
Brainteki 24
I guess it makes sense but I never considered putting this behind a Pop-up Window. That will allow it to keep it's teeth even if you're 100% broke! Pretty sneaky. — Scrub! 8 May 2015
When playing Shell Game, I use a Mushin No Shin with it often. Can they take the risk of me scoring a 3 point Agenda for so little?, if not it's a pile of damage. — Father Tork 8 May 2015
The major downside though I find with Junebug is that is must be advanced in order to do anything. There's many ways to play around that of course (Mushin being a big one) but it means that even though it is efficient in that in only costs 1 credit to use, it has to have at least 2 agenda counters on it anyway to be meaningful. — SPHNX 9 May 2015
But thats the same with all advance-able assets and not all of those activate upon access. For example, you may advance a Ronin three or four times only for it to get accessed and trashed without anything happening, wasting however many turns it took to set-up. I disagree that two counters makes Junebug meaningful. Even just two net damage can ruin a Runner's turn. Will they risk making another run with a diminished grip or will they spend the rest of their turn drawing back up potentially opening up a scoring window. That same net damage could take out vital cards that the Runner needs. — Brainteki 9 May 2015
4

As Jinteki’s primary advanceable trap, Junebug has seen a lot of use. The greatest aspect of Junebug’s existence is the shell game that is played primarily within Jinteki. Any card that has been installed and advanced twice (IAA, or Install Advance Advance) is simultaneously both a possible Junebug and an agenda that might be scored next turn. It becomes very dangerous for the runner - do they run such cards and risk a massive amount of net damage, possibly enough to kill them, or do they ignore it and let the corp score an agenda?

That dilemma is at the core of the Jinteki playstyle philosophy, forcing runners into difficult decisions and capitalizing on their actions therein.

Junebug falls into and out of popularity, often being replaced or supplemented with a Cerebral Overwriter. Junebug’s status entirely depends on the type of shell game that the Jinkteki player wants to play, does the corp want to tempt the runner with IAA cards in servers, or make them sweat with a bunch of unrezzed unadvanced cards, such as Snare!. However, its mere existence forces a knowledgeable runner to be wary of the possibility that any IAA card is a Junebug waiting to strike. That alone means it carries weight into the future of the game, even if it does not see active play.

What is project junebug?

some interesting suggestions here: https://boardgamegeek.com/thread/855669/what-hell-project-junebug/page/1 I like this one most: " perhaps Jinteki is growing and/or hyper-aging clones programmed with hacker skills to patrol their network and attack Runners - this would fit the card's ability to be advanced, as well as its name - disposable people, meant only to live long enough to serve Jinteki's needs, like a junebug - only surviving as an adult for one day, long enough to relocate, mate, and die"

Brainteki has it right. But since it has been 5 years, let's revisit this a bit.

Project Junebug is the trap to which all other trap are compared. At one influence, it can be used in any deck where you need a good trap.

A big advantage of Project Junebug is that, when you'll use it, which is usually Install-Advance-Advance, it look just like a NGO Front or a future 3 points agenda. The runner has to choose to take the risk of : 1-making a run for nothing, 2-making a run and losing 4 cards, possibly getting flatline, 3-no making the run and letting the corp score a 3 points agenda, 4-making the run an scoring the agenda (but not in this case). When the corp is on game point, it is a really tough choice.

On top of this, this trap (like Cerebral Overwriter and Aggressive Secretary) can be used with Mushin No Shin to great effect. Using a Mushin No Shin on this give the runner an even tougher choice. 6 cards is a lot. 3 points is a lot.

But what if the runner does not run and then you have an advanced trap sitting on the board for nothing? Enter the other one influence card : Back Channel. This will let you "score" Project Junebug tokens for 3 credits per token. Advance Project Junebug to 5 or 6 tokens and the runner will start to think it might be a False Flag (3 agenda points for 7 advances, 1 tag per 2 advance). If the runner run it, this can deal 10 or 12 net damage, insuring a flatline. Otherwise, this could net you 12 creds in 2 turns, or even more if you used Mushin No Shin. Pretty neat.

Using Back Channel, Project Junebug can also be combined with La Costa Grid, to let it self advance to get those sweet 3 credits without even paying for advance or using clicks (don't push it too far, the runner will find other ways).

Finally, you can combine Project Junebug with Upgrade traps, like Hokusai Grid and Prisec, to get an even greater effect.

Of course, there are cards to protect the runner : No One Home. On The Lam, The Noble Path, Recon Drone, Ramujan, Heartbeat, Deus X, Caldera, Guru Davinder, Sacrificial Clone, Bio-Modeled Network. The problem of those card is always the same, it target corp that does damage. So they can also be dead cards.

Comparable to Project Junebug (in faction) are Snare!, Psychic Field, Shi.Kyu and Gene Splicer. Snare trigger from R&D. Shi.Kyu trigger also from Archive (but not R&D), Psychic Field will take ALL the card of the runner, but not flatline. And Gene Splicer does half the damage but will grant an agenda point (often the 7th agenda point).

If you want to play the shell and bluff game, Project Junebug is damn good. Shell game is its own kind of thing in Netrunner. A special kind of fun, where you dare the runner to make runs.