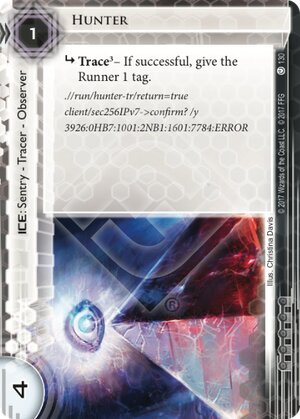 "Dude! someone broke into your stuff"

Something about Hunter made me think it was bad from the first moment I saw it. Before I even knew the rules and I was just thumbing through the cards, I got to this one and thought "Hmm..."

My hmm was later confirmed when this card taught me that not all ICE inherently ends the run and you don't need to match the strength in order to pass it. Instead you can just breeze on through and give a cheery wave to what is basically a narcoleptic speed camera. It was the card that made me realise the terrible truth every player quickly learns, that the image you have in your head about ICE as these amazing engines of terror, isn't very accurate:

No, you won't be sponking the runner in the brain every turn.

No, they don't lose a click now, because they broke the subroutine.

Sad early games aside, the trouble is even if you know what Hunter can do there's very little to recommend it, because it can't do much. These are the problems I found with it:

When you start looking into later packs you come across some things that could take advantage of a tag given during a run, Things like reflecto-cats and so on, but with just the Core Set there's nothing to really take advantage of a single tag given on the runner's turn. Your only real hope is to hit them with more tags than they have available clicks to clear them, and then that on the turn they do that you have some punishment awaiting them. Essentially you have to wait for them to make a mistake at the right time, in the right place.

Ultimately, it made me realise several of necessary but still somewhat sad truths about Netrunner, and I did start to play better (correctly) once I did. So in that way, I suppose I'm grateful for the quick lesson about how things really are, and how ICE actually works. So, thanks Hunter. You can go back to snoozing now.

(Fear the Masses era)
Tirranek 538
I always viewed Hunter as a cheap, reliable means of early last click run punishment. For what it does, the price is about right... Because it just doesn't do much. — H0tl1ne 8 Jul 2016
The Corp cannot keep the Runner out forever, and comes a point in the game where the cost for passing an ice matters more than the effect of its subs. As such a 3 credits tax for the Runner for a cost of 1 for the Corp is quite good. Just use it to protect central servers and asset, not agenda. Also if as a Runner you feel that it's better to pay 2 credits and 1 click than 3 credits, change your econ engine. That's said, sure, there are better ices than Hunter. — Lupus Yonderboi 8 Jul 2016
I re-read my comment and it sounds rough. Sorry for that, it was not my intent :) — Lupus Yonderboi 8 Jul 2016
Not at all! I'm still speaking from limited experience so counterpoints are welcome! — Tirranek 8 Jul 2016
I think in the right deck, even with a single core, this ICE can be a pretty useful deterrent. Consider Weyland Supermodernism. You've got snares, Data Ravens, Sea Source and Hunter, and of course scorches. a Data Raven and a Hunter on RnD can be a pretty scary proposition. If you walk through and don't break Hunter, and hit a Snare, now you've got 3 less cards and 3 tags to deal with. In this kind of scenario, Hunter is a must break, you can't afford to just remove the tags because your clicks need to be spend on drawing up. And since it is strength 4, and Anarch breakers being the best in the Core set, it's particularly using against Mimic, requiring Datasucker tokens or an ICE Carver out to even have the option of breaking it. All that to say, it requires the right build, but it can be very useful. — WayneMcPain 8 Jul 2016
Good point. I think I often forget about Snare in R&D because you don't have direct control over it, but at the same time your intentions can't be read and it'll have recurring value the more they dig into R&D instead of a single card on a remote server. In that way I could see it being used as a 'tax with a chance of death' sort of thing. — Tirranek 9 Jul 2016
10

Hunter is surprisingly economical as cheap taxing ice. Looking at somewhat popular breakers, in order to break the sub the runner pays:

Taxing the runner three times the rez cost of a piece of ice is good. One major downside of Hunter is that it has no stopping power. The other major downside is that that trace is hardly scary for a runner with some link.

In terms of combos Chief Slee combines well with Hunter since she makes even a high link runner inclined to break the sub instead of beating the trace (even if you beat the trace the sub has still fired so Slee gets a counter).