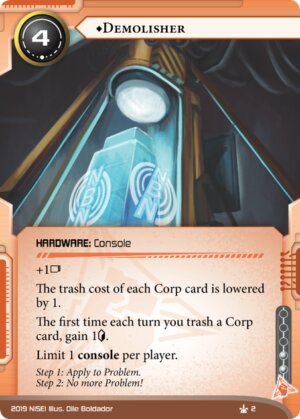 The trash cost of each Corp card is lowered by 1.

The first time each turn you trash a Corp card, gain 1credit.

Step 1: Apply to Problem.
Step 2: No more Problem!
Illustrated by Olie Boldador
Decklists with this card

Comparing Demolisher to the gold standard of trashing assets - Scrubber - it doesn't look all that appealing. On a single access, they both give you two extra credits with which to trash an asset, but Scrubber is half the cost to install! Is it worth paying 2 more for +1 memory? Furthermore, Demolisher competes with Turntable and Patchwork for the Anarch console slot, meaning you give up on messing up corp agenda shenanigans and converting cards into economy, respectively.

There are upsides to Demolisher, however. Unlike Scrubber, Demolisher will actually grant you a real credit the first time you trash Rashida Jaheem or NGO Front, whereas Scrubber just wastes one of its recurring credits. Also, if you access multiple trashable cards in a turn, Demolisher will reduce all of their trash costs by 1, which means you can save credits on trashing faster than with Scrubber. Finally, Demolisher will also pay you back when you trash corp cards in unconventional means - such as with Hippo, the Anarch cutlery suite, Freedom Khumalo: Crypto-Anarchist's ability, and the new Chisel.

So, does Demolisher pull ahead of Scrubber? Seems doubtful. That increased install cost is a big turn-off. Maybe if you're absolutely mad about asset trashing you'll play both, as they do compliment each other nicely. It's potentially also the console of choice for Whizzard: Master Gamer if you're playing casually and allowing rotated IDs.

(System Core 2019 era)
Trinity_ 27
I think you're right about Demolisher's playability. It's just not its time...yet. — BlackCherries 17 Mar 2019
As a runner I have never managed to trash an NGO Front; they always get trashed by the corp, for the sweet sweet credits, at the last moment :) — lunchmoney 19 Mar 2019
So far this has felt ike Khumalo's Paragon. — Blackhaven 1 Apr 2019