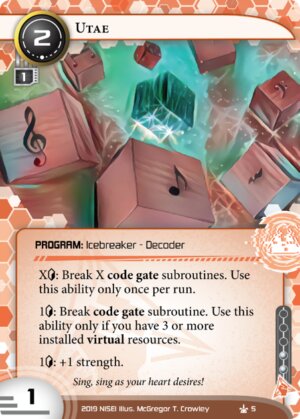 Interface → Xcredit: Break X code gate subroutines. Use this ability only once per run.

Interface → 1credit: Break 1 code gate subroutine. Use this ability only if you have 3 or more installed virtual resources.

Sing, sing as your heart desires!
Illustrated by McGregor T. Crowley
Decklists with this card

歌え or Utae is the Japanese word for "sing." ... look, that's all I've got for the translation bit of this, I'm just happy I have IME installed on my computer so I can even type out the Kanji.

Anyway, holy crikey! A decent Decoder coming out of Anarchs!? What is the world coming to?

In our modern world of Netrunner, we have the luxury of comparing any new card to a wealth of older cards, and through this we can build a basis of comparison for whether or not something is good, or bad. One of the most obvious comparisons for Utae is the tried and true Gordian Blade, since their break and boost costs are rather comparable. Out of the gate, Utae has a much more palatable install cost--2 versus Gordy's 4 . 2 is pretty stinking cheap for any breaker that doesn't have limited uses or that doesn't trash itself. It does come at the cost though, of starting off at 1 Str, whereas Gordy has 2. This means that after needing to boost Utae by at least 1 during two different ICE encounters, you've broken even with Gordy, and afterwards Gordy would just be cheaper. That's assuming that you're not facing more than one higher strength Code Gate stacked on any single server though--Gordy keeps its Str during the run, so if at any point this becomes relevant, Gordy is also going to be much more economical in the long run. It doesn't stop there though; unless you have 3 Virtual Resources installed, Utae is a one-per-run-and-done kind of breaker, only being able to break subroutines on a single piece of ICE before requiring its back-up breaker ability to move forward. This means you'll need to make sure you're running at least 3 virtual resources that you not only want to install at some point, but also stick around--not impossible to do, but certainly not a situation every runner deck finds themselves in. Lastly, Utae is Anarch at 2 Inf and Gordy is Shaper at 3.

Ultimately, influence and faction are a big factor when choosing whether to use Utae or Gordian Blade. Most of the time, you'd rather have Gordy--so if you're a Shaper who doesn't use Virtual Resources, you're never going to splash for Utae. That being said, if you're in Anarch and you're already using Virtual Resources, Utae seems like a pretty attractive non-influence option. It is clearly meant to synergize with the new Anarch Virtual Resource Companions. Additionally, the benefits of Gordy's persisting Strength will never really appear if the runner is trashing all of the Code Gate ICE on a server--something that Anarchs are known to do from time to time. Likewise, the lower install cost makes it an easier and faster card to play in the early stages of the game, as well as a less punishing target for program trashing. If your deck focuses on these kinds of strategies, (moving fast, Virtual Resources and ICE destruction) then Utae's downsides are mitigated anyway, and in fact, you may never need to break more than one Code Gate in a run anyway.

I should also point out that Adam can slap this down turn one and not have to worry about the Virtual Resources angle--all of his Directives are Virtual. With the lower influence cost and lower install cost (considering Adam tends to want to play cards fast to get the Safety First draw) this is a pretty solid choice for his Decoder if you're focused on speed. In a pinch, your Logic Bombs are also Virtual Resources, so if someone trashes any of your objectives, you still have a bit of wiggle room.

At the end of the day, Utae isn’t immediately going to blow any runner’s rig into god-tier status. That being said, it’s a fairly unique little tool that will be appreciated by those whose decks it finds a fit with.

It's going to be compared with Black Orchestra, let's face it, so let's do just that.

Looks like it's mostly just comparable rather than anything else. Over the course of a game, Utae could save anywhere between 2-8 credits. (Or more, obviously, but let's not look at the best-case — more useful to consider the average-case)

The worst-case is that you need to break two code gates and you don't have three virtuals installed yet, at which point the much more flexible Black Orchestra is looking a lot better.

So the golden question for whether to run this or Black Orchestra: Does the extra efficiency of Utae make up for the set-up cost of three virtuals, and the need to pre-install it?

I think for a lot of decks the answer will be no. Black Orchestra's not being dethroned, but cracks are showing...