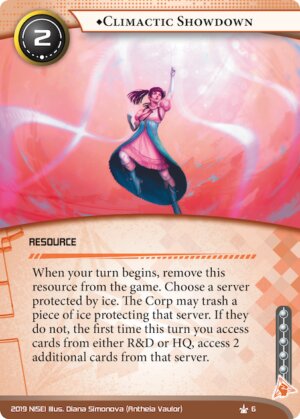 When your turn begins, remove this resource from the game. Choose a server protected by ice. The Corp may trash 1 piece of ice protecting that server. If they do not, the first time this turn you breach either R&D or HQ, access 2 additional cards.

Illustrated by Diana Simonova (Antheia Vaulor)
Decklists with this card

Shapers have The Maker's Eye, Criminals have Legwork, Anarchs now have both. Sort of.

Climactic Showdown is a potentially powerful resource with a ton of versatility. It stacks with other forms of multi access, like The Turning Wheel, eXer or the aforementioned run events. It works on either central, thus you can pick the optimal server at the time. You also get to choose which server the corp has to trash ice for to dodge the access effect, so if the corp only has a rezzed Tollbooth or a Chiyashi on the remote, this is one of the cheapest ways to trash an expensive piece of ice.

Unfortunately, CS comes with a fair share of downsides as well. First off, the corp has a whole turn to prepare for your shenanigans. This makes it a lot worse than multi access run events, which benefit a lot from the surprise factor. Not only that, the corp has a choice in the matter. If they just installed a mediocre piece of ice on the server of your choice, they can just opt to trash that. And if they'd rather take their chances on your run, that is up to them. Also, this WILL trigger at the start of your turn, as the effect is mandatory. If something came up that makes you not want to use it yet, too bad. You could play Dr. Lovegood to blank this card so you can keep the timing a surprise, but that might be going into jank territory. Last but not least, it removes itself from game, so you have no way to recycle this.

I think this card is good enough to see play, but it won't be an anarch staple.