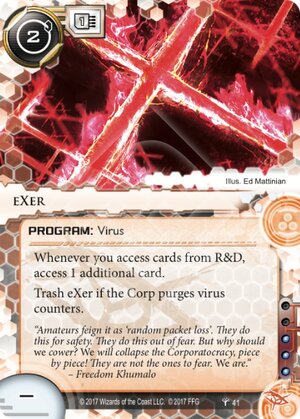 When the Corp purges virus counters, trash this program.

"Amateurs feign it as 'random packet loss'. They do this for safety. They do this out of fear. But why should we cower? <em>We</em> will collapse the Corporatocracy, piece by piece! They are not the ones to fear. <em>We</em> are."
- Freedom Khumalo
Illustrated by Ed Mattinian
Decklists with this card

The Anarch's version of Criminal's Docklands Pass, providing multi-access into R&D instead of HQ. While Docklands Pass is a card that sees it's fair share of standard play, eXer sees very little play, and probably for good reason. It costs an additional MU compared to Docklands Pass, and can often be incidentally trashed by the hyper-popular suite of Cyberdex Sandbox, Cyberdex Virus Suite, and Macrophage that is dominating the meta as a natural counter to Hivemind MaxX. Even if the Corp isn't running the anti-virus suite, spending 3 clicks to trash what the runner invested 2 credits, a click, and a card into isn't a horrible trade for the Corp, which should immediately raise some warning signs about this card.

However, this does do one important thing for the Anarch faction. It provides multi-access. R&D has always been Shaper's server to attack, while HQ is constantly terrorized by Criminals. Anarchs got... what? Archives? For Anarch decks that can't spare the influence for Conduit, eXer is a cheap, rip-off replacement, but one that can still get the job done. Multi-access is just so valuable to a runner, since it's almost like providing another run, free of clicks, and a free pass through all the ice. Chances of finding agendas double, trashing combo pieces with Imp is more likely, so on and so forth. It may be the case that the Anarch, who's strengths lie elsewhere, may actually appreciate an odd out-of-faction effect that helps shore up some of it's weaknesses, even if somewhat shabbily so.

And when an anarch deck does decide they really want ways to just pressure R&D, Stargate is going to do that job on a whole different level to eXer.