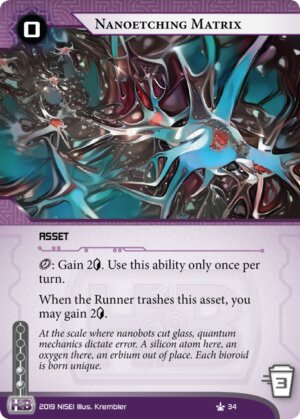 click: Gain 2credit. Use this ability only once per turn.

When the Runner trashes this asset, you may gain 2credit.

At the scale where nanobots cut glass, quantum mechanics dictate error. A silicon atom here, an oxygen there, an erbium out of place. Each bioroid is born unique.
Illustrated by Krembler
Decklists with this card

I think I disagree a bit with the efficiency evaluation made by Diogene. While it is true that "clicking for 2 creds instead of 1 is very good," I feel like once you factor in the click and card it takes to install this, it becomes not very efficient, unless the game goes pretty long. First of all, let's consider Hedge Fund. It costs a click and a card to net 4 credits, pricing cards and clicks roughly at 2 credits each. Of course, since Hedge Fund is one of the better cards in netrunner, 1.5 to 1.75 credits per click or card is a probably decent baseline for the efficiency we want out of our cards/clicks. Even cards with flexibility like Predictive Planogram have a 1.5credits/click or card efficiency rate.

Immediately we see that the efficiency is never going to outdo Hedge Fund, since it at most generates two credits per click, which is the rate of Hedge Fund. That's fine, since most cards don't outdo Hedge Fund. However, the main problem is the steep initial cost of a click and a card to install, before we start getting hedge fund level of efficiency out of it. After 2 uses, it generates 4 credits for 3 clicks and a card, which is basic-action level efficiency, something we really want to avoid. At 4 uses you got 8 credits for 5 clicks and a card. Roughly 1.333credits/click or card. At 6 uses you finally got 12 credits for 7 clicks and a card, or 1.5credits/click or card, which is more or less the baseline efficiency of most standard playable netrunner econ cards. It takes 6 turns to get to the minimum efficiency for it to be really considered, and more turns than that if you aren't using the ability every turn it is installed. The problem with this is that if this is drawn anytime past midgame it's much worse than the standard economy cards. If it's drawn relatively early, then it still can only approach the efficiency of hedge fund. The risk-reward of the card just doesn't seem to average out to something worth including.

As Diogenes pointed out, being an asset that is almost never worth trashing has it's advantages. For one, it can bait out a run from the runner, upping it's efficiency that way. You can Divert Power this since it's almost always going to be on the board once you put it there. You can trigger NEH or other "install" benefits. But it also has some weaknesses that operation based economy cards don't have. It makes centrals slightly weaker as a trashable card, and the lack of burst econ makes it harder to recover quickly, which can lead to more losses in efficiency elsewhere. Most drip econ is more efficient than even Hedge Fund, like Marilyn Campaign for corps or Daily Casts for runners. This is to counteract the bonus efficiency that burst econ can bring (since you can install more cards, earlier, which can generate more money), and for when they are drawn 1-3 turns before the game ends.

As I see it, I don't think the card will see much play outside of Divert Power decks that value an asset not worth trashing, and MirrorMorph: Endless Iteration decks which can make use of the unique click cost to fire the ID more consistently. It's not a card that has lots of raw economic power/efficiency, and so I don't think it will be widely included in HB decks as an econ engine. Rather, I think it finds it's home as a card which makes up for it's lack of efficiency by providing synergy with Divert Power or ID's like MirrorMorph.

@JacquedZhang : great analysis! In the meta of 2021, which goes much faster, it might not be a great card. 1.5 credits/clicks after 7 clicks is not optimal. The 2020 meta was slower and allowed the use of those clicks. But because it create a pretty big credits differential, this could be leveraged with deck using Hard-Hitting News or Punitive Counterstrike. Thanks for sharing your analysis, it is very well though out. Cheers!

Just liek Calvin B4L3Y, this card is very good. Because of its cost of 2 influences, it can be moderately splashed outside Haas-Bioroid. Still, this is like Tri-Maf Contact, only better. Because once you trash it, it give an astounding 5 credits differential between the corp and the runner.

Econ wise, it is pretty good. Click for 2 creds instead of 1 is very good. Not amazing, but better than clicking for 1 cred. On top of that, it stay on the board. Tempo wise, it is ok. The amazing part comes from the differential when trashed, and the synergy with cards like Divert Power.

Nanoetching Matrix will see more play in asset spam deck, but is good in any type of deck, except maybe Glacier.

The art is weird and fit with the name of the card. The flavor is excellent. It is a HB card through and through.

Am I the only one who thinks these economy tools should be neutral? I get that it might be too late now, but it feels weird to me seeing cards like this and Green-Level being HB. Low-to-moderate influence to import still is importing cards for other factions. It's a similar idea to the anarch breakers, from Core 1.0 up through the Conspiracy Suite just being better for what they cost.

I think it IS good in glacier. It just doesn't go in the scoring remote, but in a second remote with a single piece of mid-range ICE, like Turing. If trashed, use the same server for Marilyn instead.

2 Nano + MirrorMorhp really works for me ( I do 2 diffrent action such as install card / play an event) then as a 3rd action I use Nano then get 4 click to spend on 2nd copy of Nano and you finish your turn with 2 diffrent actions + 4 credits :D