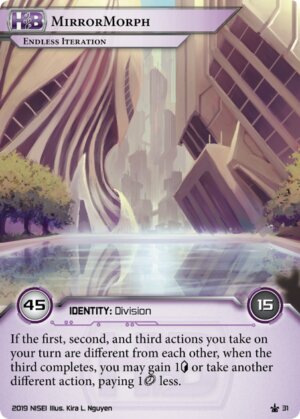 If the first, second, and third actions you take on your turn are different from each other, when the third completes, you may gain 1credit or take another different action, paying 1click less.

MirrorMorph. Such a shame that Shipment from MirrorMorph rotated with the new System Core. At first, I said that mostly as a joke, but the more cards from Downfall are previewed, the more I believe that the shipment would've made a powerful tool in this deck.

Any new HB ID will inevitably be compared to Haas-Bioroid: Engineering the Future, so let's just get it out of the way. In this case, the comparison isn't entirely without reason, either. Both have a triggering condition, that, when met, can give you 1. So is MirrorMorph just a strictly worse ETF? Not quite, since if you can take four different 's, you can get an extra action instead. And I assume most people will agree that a is worth more than a . So you'll end up triggering this less often than ETF, but when you do trigger it, it will be stronger.

However, by default, the options available to you don't really encourage you to take 4 different actions per turn. Draw/Event/Install/Advance, maybe but that seems like a stretch. Luckily, assets with abilities also count. MCA Austerity Policy seems especially potent in this kind of deck. And in Downfall, we're getting a few more assets that can help with this style of deck: Nanoetching Matrix and Calvin B4L3Y.

However, all of these assets have a problem: they can be trashed. And apart from MCAAP, you can't put them in your scoring remote, since you need to keep them around to make use of them. This would mean some kind of asset-spam deck would work better, but MirrorMorph doesn't provide any way to protect your assets. A of 3 is not cheap, but it won't stop a runner. And yes, you do get some value when this happens, but getting all your assets blown up all the time means you can't take advantage of your ID.

But what if you ICE'd them? Historically, asset-spam decks don't bother putting ICE on their assets: they need the ICE they have to defend their central servers and scoring remote, and decks like Gagarin Deep Space: Expanding the Horizon and NBN: Controlling the Message have ways to stop you from just trashing all their assets. However, the existence of the card Fully Operational seems to hint at the fact that NISEI wants us to ICE our asset remotes... or is at least willing to reward us when we do.

In this approach, you would use cheap, taxing ICE, not to stop the runner, but to make them pay even more for trashing your Nanoetching Matrix and Calvin B4L3Y. When they do, you get more money and cards, that you can then use to play more assets and ICE, and so forth. Agenda-flood can be solved with Preemptive Action, Gatekeeper, Drudge Work, Attitude Adjustment, and so forth.

This would lead to a very snowball style deck: if you can get enough assets in play to draw lots of cards and gain lots of credits which you use to get ahead further and further. If the runner can stop you, you'll probably be helplessly flailing trying to stop them. I'm curious to see what this deck ends up looking like. Maybe I'm looking in completely the wrong direction, and is there a combination of cards that is yet stronger still. And CSR Campaign still needs to find a place somewhere...

One final note about the ID: getting operations that can let you install cards is important. Lateral Growth and Red Level Clearance can assist when you want to install an asset, ICE it, and still get four . Maybe Advanced Assembly Lines can be used to "store" an install for when you need it. Shipment from MirrorMorph would've worked great here, letting you fill the board with your assets, but sadly, it is not meant to be.

Mirrormorph, I love you.

With that out of the way, after playing Mirrormorph more or less exclusively for months, I'm here to give my thoughts:

First thing I learned about Mirrormorph was that Calvin B4L3Y was never really needed. Clicking for a cred for the Mirror trigger was often inferior to drawing, so unless you had no choice but still wanted to trigger Mirror (install, draw, cred) or really needed the cash, Mirrormorph never really wanted for cards. In short, ProCo>Mopus for Corps.

Which leads me to the second thing, flooding. Once you get used to drawing over clicking for the Mirror trigger, you will often find yourself flush with agenda. Gatekeeper helps a bit but it's a reactive card and a proactive option is preferable. Enter Drudge Work. It was a late addition to the deck and boy do I regret that decision. In 95% of my games it has been a godsend, shuffling away vulnerable agenda for cash while triggering Mirror. I've barely had ten games with it and yet I was quickly reminded why I love it when it became a decisive factor in at least two of them. Never change, Drudge Work. Never change.

As for wincons, the obvious wincon is MCA Austerity Policy but do consider Jeeves Model Bioroids as well. As useful as Mirrormorph can be, it can be a bit unwieldy. Jeeves is also unwieldy but it is unwieldy in a way that perfectly complements Mirrormorph. Rare are the turns where you must take 2 of one action and one of another, meaning you can always either fire Jeeves or fire Mirrormorph for that tasty, tasty click. Them combined also gives you access to some stupid combos such as: windmilling a 5/3 or Vitruvius out of hand from a 2 advanced MCAAP with a click to spare (Leela), pushing a 3/2 past a Clot from a 2 advanced MCAAP (purge after the second advance if they summon Clot), and installing and firing another MCAAP after scoring a 4/2. It being a 5 asset also means it has staying power compared to other, squishier assets in HB and its efficiency means that it's a lightning rod for runs despite only being nice rather than necessary in Mirrormorph. It's also possible to sneak a purge or score an installed 4/2 past the runner using Red Level Clearance with it. Great include.

Another wincon option is Hard-Hitting News+BOOM!/High-Profile Target. I've been saying this for months but it still catches people off guard: MCAAP+HHN is a very dangerous threat and you should always be wary of HHN if you see MCAAP. MCAAP messes with the tag math immensely and allows for tag punishment outside of the kill option. My preferred tag punishment is The All-Seeing I but Closed Accounts, Exchange of Information, and Self-Growth Program are all valid options depending on your style.

Mirrormorph's greatest asset is in being able to act from unexpected ranges. I was told once that its best trick is in windmilling 5/3s and, while true, I feel that's selling Mirrormorph short by a lot. Mirrormorph isn't just about scoring that 5/3 from a little further away than expected, it's also about that extra credit in its back pocket for the punish, that extra install or advance you can sneak past for the scoring threat, that extra bit of efficiency that lets you stay one step ahead of the runner at all times. In short, Mirrormorph has more options to blindside the runner with efficiency than just MCAAP so do try it out!

And it only took a bit of Endless Iteration to get there, eh? Eh?

The more I try to play Mirrormorph the more I am convinced the identity is secretly terrible.

The reason for this is simple: deckbuilding space.

If you want to consistently install a card each turn, around half your deck needs to be cards you can install.

If you want to consistently play an operation each turn, around half your deck needs to be operations.

If you want to consistently advance cards, around half your deck needs to be advance-able cards.

There just isn't enough space to profitably use Mirrormorph every turn.