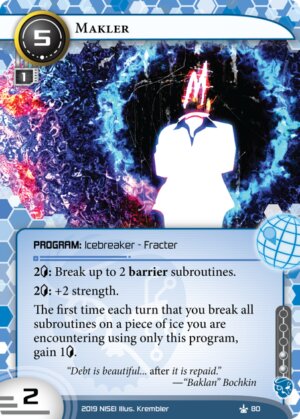 The first time each turn this program fully breaks a piece of ice, gain 1credit.

At the time this review is being written (just after the Midnight Sun booster pack has been released), the barrier environment with respect to meta decks could be worse for our friend The Broker. It's worth noting that this partially driven by the ubiquity of Paperclip, which is superior in every single way. To be worth running your barriers must work well as a dirt-cheap gear-check, cost-effective tax, or have some other ability.

So, faction by faction how do Makler and Paperclip stack up against the barriers you are reasonably likely to see? For the purposes of this list, let's assume you fully break and do get the Makler rebate (more on that later).

So where does this leave us? At a quick glance, it doesn't seem that bad for Makler -- at most 2 credits worse and against the omnipresent Border Control, it's cheaper*.

The problem is Mr. Broker's cost of doing business. 5 credits is no small fee, and unlike Paperclip you also need to keep it around in your grip AND spend a click to install it as well. 3 strikes against compared to the clip; why would I spend ~6 credits to install something worse than I can pay 4 credits for? Moreover, you had better not want to fully break a barrier more than once per turn or all of the sudden Makler goes from even to 2 credits more, to 1-3 credits more, which can add up quickly.

All in all it could be worse. Makler's stats are not so bad as to render it unuseable, but you had better have a really good reason you can't find 3 influence to slot the best fracter ever printed.