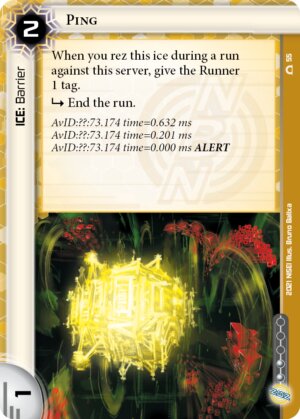 When you rez this ice during a run against this server, give the Runner 1 tag.

I've been trying out Ping quite a bit lately. Here are my early impressions.

First of all, Ping is a card of two halves. There's the rez trigger, which only happens once a game, and there's the ETR subroutine.

Looking at the ETR subroutine first. This is basically as strong as an unadvanced Ice Wall, slightly stronger than Vanilla; it's a gear check and nothing else. Almost every fracter can break this for 1. So this really isn't the reason you'd play Ping. Perhaps, if your deck has rushing as an early-game strategy, you might choose to use your Ping as a Vanilla-alike to rush out an agenda behind, but this is only really a fringe use.

The main value of the card is in the rez trigger. This is, unusually for ICE, something that only works once. So Ping is best thought of as, in effect, trap ICE, an ICE subtype that hardly ever gets played. The basic problem is that although traps might have a useful effect, the Corp has very little control over the timing; you can delay it (by not rezzing the trap), but you can't make it come earlier; you can fire the trap when the Runner runs a particular server, but not before.

A good comparison is Special Offer. At first, that looks like a better Sure Gamble – it still gains you 4, but you only need 1 to play it. However, it doesn't work out nearly as well in practice, because the Runner may stubbornly refuse to run the server it's on while you really could do with the credits right now. Ping has similar issues: you might want to land a tag on the Runner at a particular time, but you can't, you're limited to tagging the Runner at the point when they run on Ping's server.

However, Ping is a much better card than Special Offer is. The thing about tags is that if you tag the Runner during their own turn (or at the end of yours), the Runner pretty much has to clear the tags later in the same turn or face your tag punishment on your next turn. So that's a potentially unexpected , 2 penalty they'll have to pay mid-turn. The credits aren't normally that much of a problem (but they can be if you built your deck around it, or are playing SYNC); but clicks are one of the most limited resources in Netrunner, and clicks on a specific turn are even more limited. Cautious runners will often leave one click spare before making a run, but holding up two, or even three, clicks would be very unusual. So as long as you can land multiple tags on the Runner, your ICE will be getting you its value, if and when the runner chooses to run it.

This makes it clear what the best use of Ping is: you want to put it on your scoring server. You want to put all three Pings on your scoring server. The scoring server is a server that's hardly ever run (most of the time there isn't even a card in it), so most likely the Runner won't get suspicious of the fact you aren't rezzing ICE there (and stacking ICE on a scoring server isn't a suspicious thing to do either). When you finally do install an agenda there, the Runner won't be able to afford to bounce off all the Pings on separate turns (or you'll just score it). So they'll likely try to get in in one go, and end up taking three tags for their trouble (maybe even four if you put the Pings behind a Funhouse, or in front of a Thoth; other sequences also work but not quite as well). The most likely scenario in which the tags actually get cleared is that the Runner has Self-modifying Code already installed, uses it to fetch Misdirection, and still has two clicks left, and that isn't a particularly likely scenario. So most likely, in order to run on your agenda, the Runner is going to end up tagged going into your turn. You'll need to have your deck set up to take advantage of that, but if you're playing NBN, it probably is.

Incidentally, it's worth noting that "put Ping on your scoring server" is also what you want to do if you're using it as gear-check ICE, so it ends up going in the same place pretty much regardless. It isn't a piece of ICE where you have to make hard choices about where to put it. (Perhaps if it's your only form of HQ defence early-game, after a mulligan. Even then, though, I'd rather place it on a remote with an agenda behind it.)

In order to use Ping effectively, you need to build large servers with it. So aside from tag punishment (obviously), cards that synergise with Ping are generally cards that make it cheaper to construct large servers, such as Jinja City Grid, or that synergise with servers that are already large, such as Surveyor. Valley Grid would have been a really interesting choice (Ping has a hard ETR sub, so running through three Pings would reduce the runner's maximum hand size by 3, making it much easier to flatline them on your next turn with the tags); sadly, though, it rotated out as Ping rotated in, so the combo was never in Standard and probably isn't good enough for Eternal. Surat City Grid is an interesting choice to trigger all your Pings at once; I haven't tested this yet, and suspect it might be overkill (i.e. if you get to actually set the combo off, you would have won the game anyway), but as a jank lover I may well try.

There's also Divert Power, which lets you Ping the runner a second time. I have tested this, and don't think it's worth it; if the first pinging doesn't work out, a second pinging is even less likely to help (because the Runner will be prepared for it, and will likely be close to 7 points by then so may be able to close out the game on their own turn).

Also, on top of the gameplay review, here's a flavour review. In real life, pinging a server is a way to determine whether it exists and you can connect to it, and how long the connection takes; you send a message to the server and it copies it back to you, and you can measure the time between the send and receive in order to see how fast the connection is. Just like in Netrunner, in real life, pings are often spammed in order to get more information than a single ping would give you. Using large sets of pings lets you do tricks like a "traceroute" which can give you an idea of where the server is on the network; you send a range of pings with different timeouts and see how far they get before they get turned round and sent back to you, so you end up with replies from all the servers between you and the server you're pinging. This seems exactly like the sort of thing that NBN would try in order to locate a runner; even if the Runner's rig itself is configured to refuse to return the ping requests, maybe they can get useful information from the replies from the servers along the way (especially because, in the Android universe, you'd expect NBN to own many of them as it is).

The main flavour problem with it is that I don't see what about a Ping would represent a run-ending barrier. That said, the card itself is hardly really a barrier, too; it looks like the ETR sub was just tacked on to give the card something else to do, because it's hardly really relevant when it comes to the card's play pattern.

Definitely not-made-up spoilers on why the ETR exists; it's actually just NBN's CAPTCHA code test that a sysop tossed onto the pinging device for fun.

You forgot one of the most important things about Ping: If you rez it as NBN: Reality Plus, it´s a 0 cost 1 strenght ETR ice which forces the Runner to lose a <span class="icon icon-click"></span> and 2 credits. I won´t expect Ping to have only a "fringe" use as a gearcheck in Reality Plus because here it´s really better than Vanilla

May the sub should have read 'etr if the Runner is tagged' alongside a slightly higher strength.

A very solid alternative to Vanilla. Ping is one of the most commonly used barriers. It's a cheap end-the-run with an ability that guarantees that rezzing it will be at least tempo-neutral. In NBN, this will frequently be used like Vanilla to quickly/cheaply force runners to install an expensive fracter. In Reality Plus, this is a straight upgrade on Vanilla (+1 strength and a tag on rez).

In the right kind of deck, Vanilla is very good in its role, and Ping will be too. They produce excellent early-game results with limited value once the runner has a fracter. It'll rarely cost more than $1 to break (besides the initial tag), so this'll see a lot more use in decks that prioritize speed over long-term value. If you anticipate the game going 10+ turns this probably isn't the ice for you.

At two influence, this will probably not see much use outside of NBN. (Nobody else can do much with one tag on the runner's turn, and it's two influence that could have been another Hard-Hitting News).