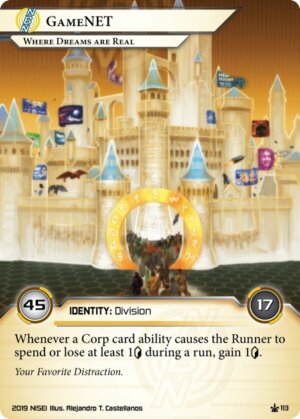 GameNET: Where Dreams are Real

Whenever a Corp card ability causes the Runner to spend or lose at least 1credit during a run, gain 1credit.

Your Favorite Distraction.
Illustrated by Alejandro T. Castellanos
Decklists with this card

For anyone who thinks GameNET is a bit underpowered, slot Shipment from Tennin in. GameNET's strength isn't in it's infinite economy, it's in its ability to be paid for something that's going to happen anyway. So you want to make sure that something happens as quickly and as frequently as possible. Glacier isn't the way to go with GameNET and its 17 influence, Fast Advance is.

As much as I gush about MCA Austerity Policy, it's too slow for GameNET and doesn't force enough runs. CalTest and BassC are both out for the same reasons. You don't want to create a single target that turns off the Corp's FA, you want to threaten from as many avenues as possible. You want Operations since those can't be trashed normally and force the Runner to check HQ, R&D, and remote for agenda. Remastered Edition is worth a mention for being an agenda that advances the train. FA works because GameNET gets paid while the Runner works to stop the FA train, eliminating one of the biggest weaknesses of FA. The fact that GameNET's ICE suite makes repeated runs especially painful is just icing on the cake.

The main go-to's then are the above mentioned Tennin and Biotic Labor with Tennin being the clear instaslot. Trick of Light works if you can tolerate the added steps and so does Audacity if you think a deck is robust enough for it. Maybe slot in some recursion for the long haul as well.

All in all, I'd argue that GameNET is not only NBN's best FA ID but one of Netrunner's best FA ID's, period. Agree or disagree, glhf mtbmw.

GameNET looks at first glance to be very powerful.

"Hey look, it's a 'whenever'! It's always the 'whenever's that are the broken cards!"

Sadly, there's a bit more to this.

ICE is often bemoaned for either never firing or not doing enough, and that's for a good reason: the runner has the choice to let subroutines fire or to pay credits to break the ICE. These "punisher" effects that let your opponent choose what happens always play much less powerfully than they appear on paper — remember, when evaluating cards, you shouldn't look solely at the best case scenario: you need to consider the average case and the worst case too.

Let's also look at it from a different angle: economy is most effective early in the game when you want to be setting up: you need money to install ICE, to rez ICE, to advance agendas, to play Hard-Hitting News. When does GameNET come into play? When your Gold Farmers and Turnpikes are already rezzed. GameNET starts raking in the money when you can force the runner to run through your servers over and over... but how did you get to that point? How did you get the money to rez the ice and to score enough agendas to force the runner's hand?

The answer is that you were Azmari EdTech instead.

Maybe GameNET would be less underwhelming if it had been released a few years down the road. As it is, the shadow of the slightly-too-pushed Azmari will loom over GameNET for most of its Standard-legal lifespan.

I agree that Azmari can make a lot of money over the course of the game. This ID makes the runner play differently. I have noticed that runners are way more cautious when running through ice like Slot Machine, Turnpike, and Gold Farmer because of the money you get. Servers start having a lot more weight and in NBN that is sort of strange. Azmari forces the runner to consider whether they will play a type of card but after that they don’t care if they run through your servers as long as they can get in.

Whoops hit post a little early. I don’t think this ID is dead you just can’t play it the same way you play Azmari. Don’t rely on the ID money but use it to position to defend multiple servers. If they run through a server they give you enough money to Rez the rest of your ice. Early glory runs with Link runners also give you extra cash because they want to just pay through the cheap trace for one coin.

Out of curiosity,. would you be willing to take another look now that Azmari is banned?

I have been playing a fair bit of GameNet recently and I have to say that I've fallen in love with it. It's a very versatile ID, which means that the runner never quite knows what to expect. I have been playing a "fast glacier", with as many taxing ice as possible to cripple the runner while I fill up on credits. Endless EULA is particularly fun, giving you six credits if they decide to pay to break, although the reintroduction of Parasite with Salvaged Memories is a bit of a bummer for it. I run Remastered Edition, Project Beale and Bellona as agendas, which synergize very well with the ID. Tollbooth is a must as well. Even Pop-up Window gives you two creds for zero rez when they let it fire!

You could probably pull up a nice kill deck with it, getting paid for traces firing during runs, or even something spammy with Pop-up Window or Datapike protecting your assets.