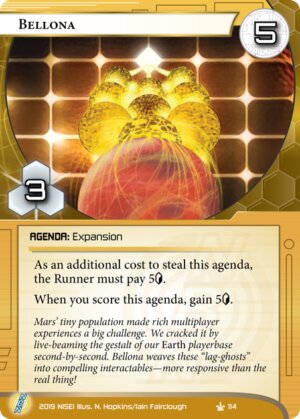 As an additional cost to steal this agenda, the Runner must pay 5credit.

When you score this agenda, gain 5credit.

Mars' tiny population made rich multiplayer experiences a big challenge. We cracked it by live-beaming the gestalt of our <em>Earth</em> playerbase second-by-second. Bellona weaves these "lag-ghosts" into compelling interactables—more responsive than the real thing!
Illustrated by N. Hopkins, Iain Fairclough
Decklists with this card

This agenda does a lot for you as a Corp that other 5/3 agendas can lack in.

It instantly recovers your spent money after scoring. This may be obvious after reading but regaining the 5 credits spent to score is incredibly powerful to keep defenses up on central servers. If you are in credit hell (5-8 credits) it is usually a death sentence to try to score an agenda that will not give you some cash. SSL Endorsement would also fit for scoring with low money.

However SSL doesn’t do quite as good of a job for instantaneous evening of money. If a Corp is trying to land a trace on their turn this agenda does some work. Early game this will put the Corp up +5 (+6 if playing as GameNet) from their current position. That is often enough to ensure a HHN or a SEA Source. Since it just makes the runner poorer after a steal, I would recommend SSL Endorsement if you need it as a source of income.

As another NBN agenda that has an additional cost, making the runner poor can be a potential strategy with Degree Mill and this agenda.

With the additional cost, it can add another secret cost to your remote server that the runner had not anticipated. IAA on a remote with all of the ice rezzed can be dangerous without some additional defenses. This agenda has been quite successful to stop Stimhack runs that had not anticipated an additional 5 coins on top of the server costs.

This is a great agenda and will probably be joining Degree Mill as the only consistently played NBN 5/3s.

Good review with comparisons to other meta-heavy 5/3s.

Important to note, however, this does lose to Critic :(

That is true but since she is restricted we might see more whistleblower if NAPD Cordon and Bellona start bubbling up.

I understand what you are saying, but I think what this does is help protect Corps from early and explosive multi-accesses from Runners if your agendas are inconveniently stacked. In the mid/late game, the Runner should have enough money and tools needed to break into the server to stop a 5/3 from being scored. As for “zero momentum lost”, I think that is a bit of hyperbole as you had to install and rez ICE to keep them out and spend 5 click and credits to score it. If the Runner cannot stop all of this from happening, then the 5 credits is not going to swing the game already in the Corp’s favor, but it will help stop the Runner from stealing 2-3 agendas a turn outside of Film Critic/Whistleblower.

Bellona rebates the 5 credits used to score it. That is what I meant by zero momentum lost. The Corp spends nothing but their time to earn 3 points if they're scoring Bellona. That econ ability to pay for itself is very potent on a defensive agenda since defensive agenda are usually balanced by being blank when scored. Bellona rewards the Corp for doing what it's supposed to be doing anyway while having an unusually wide scoring window. It is overtuned and opens the door for bs combos.

I think the key factor here is Mushin more than Bellona. E.g. Mushin -> Armed Intimidation -> NAPD Cordon. Assuming they don't have 10 (!) credits early to steal it, next turn you score Armed Intimidation on click 1. Disembowelment imminent.

One of the best 5/3 agendas in standard play. Runners usually have a pretty good idea how much $ they need to pull off a run. The widespread use of Bellona pushes runners to gather $5 more than they would otherwise need or risk crashing on a Bellona. When the runner is calculating different lines of play, the agenda being Bellona is usually the least pleasant scenario. Every NBN scoring window becomes a little more dangerous with this in your arsenal.

In addition, it gives you $5 when scored, which might make scoring out an agenda feasible in an economically tight situation. Normally, if a money-poor corp does an install-advance-advance, it's probably an NGO Front rather than an agenda, because bankrupting yourself to score a non-winning agenda is generally suboptimal. This makes it easier for the corp to take advance of low-$ scoring windows and harder for the runner to guess what is happening.

Together, Bellona's defensive ability and offensive ability combine into the power of uncertainty. This agenda fits into windows when you wouldn't otherwise expect a 5/3 and as runner you either need to have additional cash on hand to adjust or run the risk that you waste a key run.