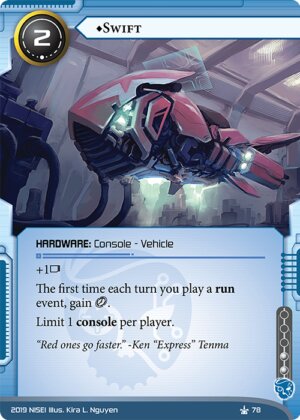 The first time each turn you play a run event, gain click.

Swift hasn't been around for long but is already making waves in the community. And even though I am not a crim player, I can see why. 2 credits for a 1-MU console is good value, and then there is the effect. The first run event you play every turn is clickless. Since there are dozens of run events, many of them good or even amazing, this means your investment pays off in no time.

The obvious synergy is with Ken, whose entire shtick is run events. By not only gaining a credit but also effectively a click for the first run event each turn, you are rewarded for hammering the corp early. This is effectively his console, lore be damned.

But our favorite clone is not the only one who can benefit from this hardware. Plenty of aggressive anarchs, such as my personal favorite punk rocker, also love run events and free clicks. And at 2 influence, Swift can be incorporated into those decks. But the real kicker comes in the form of Apocalypse. The free click gives you some leeway to pull off the three runs required to fire this monster event, and still being able to do things afterwards. This synergizes with Ken and Lizain particular, since most their cards will be events anyway, so there won't be a ton of runner cards to turn facedown.

Swift does have some in-faction competion from the amazing Paragon, and Geist and Az McCaffrey will probably prefer Masterwork. Still, I expect to see this console a lot both in criminal and out of faction.

Cpt_nice does a very good job at breaking this down and I agree 100%. I am here to highlight possibly my favourite splash text in all of Netrunner. The fact that Ken "Express" Tenma quotes the Orcs from 40K, makes for my favourite Easter egg in the game, and I am surprised no one has mentioned it all these years.