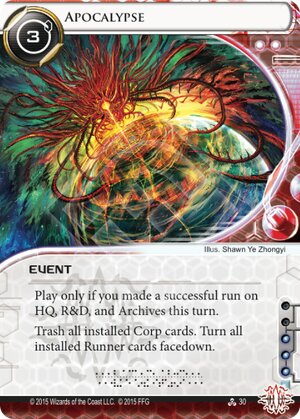 Play only if you made a successful run on HQ, R&D and Archives this turn.

[This review considers flavor only. If you don't care about the fluff, feel free to slide right past it.]

Let's have a look at the flavor, uh, text.

The way it is written might be a direct reference to a certain science fiction novel, and a single work of fiction I have found to be the most disturbing thing I have ever read - that is, "I Have No Mouth, And I Must Scream".

To those unfamiliar with the topic, it's a postapocalyptic sf story describing a cold war-era military computer (known simply as AM, for Allied Mastermind) gone rogue, taking control of the whole world's nuclear arsenal and almost completely wiping the humanity off the surface of Earth. Almost, because there have been five people left - which AM had purposefully kept alive and made almost completely immortal, for the sake of torturing the living heck out of them for the rest of eternity with the most cruel ways imaginable - out of sheer contempt and hatred for creating it, but making it non-sapient, unable to express creativity, unable to touch, taste, breathe.

There are only two parts in the text in which AM "communicates". It uses the telegraphic Baudot code - the dots in five rows, punched onto a nylon tape - to say "I think, therefore I AM" and "cogito ergo sum", the sign of it being self-aware and the proof that everything it did, it did because it WILLED to do it.

What is the reference? Unsurprisingly, the Baudot code is the alphabet this flavor text has been presented in. The dots herein add up to words "The Destroyer of Worlds". Not very imaginative for a card named "Apocalypse", right? Not really. Harbinger's flavor text, shown in the same manner, transcribes as "I Am Become Death". The two add together to form a well-known quote from Bhagavad Gita, made popular by Julius Robert Oppenheimer, a man most known for his part in Manhattan Project, and the father of the nuke.

Think again. Apex is said to be a military AI, used for some nefarious purposes before the great Blackout (which had obliterated the Internet as we know it today, promptly replaced with SYNC, or simply "the Network"). The Blackout itself is said to have been caused by an unknown, self-aware worm able to evolve so rapidly that any effort to stop it would be completely fruitless. Could that be Apex? And if so, could Apex do it again?

Would it do it again not out of so-called notion of hunger, but because it hates its creators and wishes to destroy them?

(Intervention era)
H0tl1ne 414
Ellison is one of my favourites, up there with Gibson and Stephenson. Thanks for this, really enjoying the lore of this setting. Working on adapting it to an Eclipse Phase 'prequel,' this gave me some great ideas. — zengoshugoju 23 Nov 2016
Glad you liked the review. Care to tell me more about the adaptation? — H0tl1ne 24 Nov 2016
Initially I was shamlessly cribbing off of the film Moon, as well as that old Sean Connery flick Outland, but this has swayed me towards tying in the Titans somehow, Transhuman Studios take on the whole Skynet trope. Nothing firm yet, but I sense a genesis story in there somewhere! — zengoshugoju 26 Nov 2016
11

This card is crazy, and I think the meta is going to be really interesting once people start appreciating it.

It's gotten off to a slow start, because of the 3 data and destiny runners, Apex seems to be the weakest at first blush. So I don't think people are looking at his cards too closely. And 3 influence is steep for a neutral card.

But make no mistake. This is one of the most powerful cards in Netrunner. Trashing even one piece of ICE is a major effect. Wiping away the entire board is huge. Things are going to be really interesting once people start slotting it in.

It's bad enough when Apex plays it, because at least there you can see it coming. Where this card will really shine though, is when people start slotting it into other decks as a one-of to surprise the corp with. You'll just be playing a regular game vs. Andromeda or something, and then suddenly, BAM. Board wipe. All of your precious ice, all of your beautiful assets and upgrades - gone.

It punishes horizontal asset spam builds just as much as glacier decks. The only thing that can stand up to it is Architect, and even that has some interesting interactions. (When making an apocalypse run, you usually don't WANT to break the architect. Because anything they install is going to blow up in a moment.)

Criminal is the most obvious place to put this, just because so much of their "rig" consists of the threat of powerful events as much as it does programs or hardware. Cards like Aesop's Pawnshop and Chop Bot 3000 are good ways to recover after an apocalypse, offering free, clickless card-draw and econ for the foreseeable future. Or heck, just slap down a R&D Interface or Keyhole and watch the corp scramble for ice.

I've been gushing over this card, (because it rules) but it is probably worth at least mentioning the downsides. First, it doesn't TRASH runner cards - it flips them. So if you're counting on recursion to get your things back, you need to figure out some way to trash your precious rig after it's been flipped. Also, unless you include extra clicks (Amped Up, All-nighter or Hyperdriver) you're probably going to be playing this last click, meaning it will wipe out any defenses you have. So be very careful playing this if you have to take a tag during your three central runs, because afterwards, you're not going to have your Heartbeat or Plascrete Carapace to protect you from Scorched Earth.

Anyway! This review has gotten long enough. Go, try this card. Throw one of them into a deck, and just think of it. Any time you're frustrated by a horizontal asset-spam deck. Any time there is some horrible glacier, protected by Caprice and Ash and who knows what else.

Any time the corp has the board in a state that is really bad for you.

Think about how much cleaner everything would look if there were an Apocalypse.

(Data and Destiny era)
Bwob 661
Hey question: if you have runner stuff installed on a card, for example an Endless Hunger on Scheherazade, does that stuff turn facedown on Apocalypse? Or is that stuff trashed? — Calcifer437 9 Dec 2015
Way too OP of a card — yokhen 14 Dec 2015
Should have been a 5 inf — Seanwhat 26 Dec 2015
@Calcifer: Turning cards face down does not affect their hosting status. So, if you flip Scheherazade, both it and all the cards it was hosting are still there - just all face down. (And if you trashed the one that used to be Scheherazade first, the rest would be trashed.) Or if you have a parasite on an architect (because you make poor life choices or something) then it would still be there, just face-down. The weird one comes from street peddler - it flips, and it still keeps its facedown cards, but they (still) don't count as installed, and they stick around until the former street-peddler is trashed. — Bwob 21 Jan 2016
It's worth noting that if you can squeeze out a fifth click somehow you can run Archives a second time to pick up all the agendas that were on the board before the corp has a chance to re-ICE it. — LordRandomness 2 Feb 2016
works great with ddos too — Him 5 Feb 2016
Can I trash apoc-facedown'ed ice breakers if i install new programs (especially for Anarch-breakers)? I know I got a trash window before installing programs, but does this also include facedown ones? — Vortilion 5 Nov 2018
Facedown cards lose their subtype so they're no longer programs or icebreakers. — BlackCherries 5 Nov 2018
So basically i can't get a facedown Paperclip or MKUltra etc. back into the bin without special card effects for trashing... RighT? — Vortilion 6 Nov 2018
Yes, you'll need a card that trashed installed Runner cards - Aesop's possibly. — BlackCherries 6 Nov 2018
3

Assimilator actually makes this card lose the draw back of having your cards flipped. After an Apocalypse it's easy to get your setup running again in a few turns just by installing Assimilator and click-clicking the necessary pieces back up.

For example, if the corp doesn't have any ice to slap on the centrals just flip your Turning Wheel or Aumakua and go to town. If you flip a Rachel Beckman first, it's not even going to take you much effort to bring the whole rig back and keep clicking runs, cards or credits either.

It's pretty neat. Can build a big rig Apex with Morning Stars and shiet and just flip them back up after apoc.

(Down the White Nile era)
tendermovement 49
3

Unfortunately this card is the reason that Apex can never EVER be given a good replacement for Endless hunger. While Adam and Sunny are playable Apex is sorely neglected. They might have just printed all apex cards as anarch. Basically this card killed the minifaction. Sad, sad, SAD. Ban this card already!