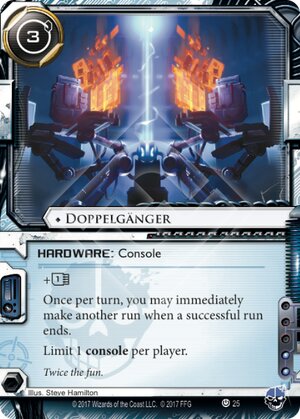 Once per turn, you may immediately make another run when a successful run ends.

Twice the fun.
Illustrated by Steve Hamilton
Decklists with this card

Stacking multiple effects to accomplish multiple tasks in a single action (click or otherwise) is well-known to be one of the keys to successful decks. Spy Camera Geist with Tech Trader, Technical Writer, for instance, works because you get so much value off of each install.

Can you leverage enough successful-run effects to make Doppelgänger shine? The recent release of Temüjin Contract certainly moves the needle in that direction because it triggers on successful run, but is not a replacement effect: this allows you to stack it with previously-unstackable effects. Some ways that an extra run can be applied (with individual effects marked as R for replacement or NR for non-replacement):

There are additional enablers for a run-based engine as well: Early Bird, Data Breach, Out of the Ashes are all contenders (analogous to Replicator, and/or Bazaar in spycam builds).

The question is, does Doppelgänger outperform Desperado in a strategy that is based on using successful runs as fuel for the win condition (and not solely for stealing agendas)? I'm not sure, but I think it's worth a careful look, especially in the current asset-heavy horizontal meta.

Review written at the release of Blood Money.

(Blood Money era)
internet_potato 951
What about effects the benefit from just making extra runs? Notoriety, Quest Completed, Apocalypse and the new Data Breach all enjoy great synergy with Doppelganger (although I'm not sure how the interaction with Data Breach really works...) — FarCryFromHuman 15 Sep 2016
5

Doppelgänger gets beat out by Desperado in most ways except for influence. It's harder to use Desperado outside of Criminal because of its 3 influence cost, and now it's tough to squeeze the old cowboy into any decklist because it's on the NAPD's Most Wanted List. I have a feeling this is going to encourage Crims to explore other options at console, which could give the D-O-double-P a chance. If it doesn't, I doubt anything short of card errata of Desperado will make Dopps and other crim consoles see play.

I most often see Doppelganger in centrals-focused decks, using the extra run to meet the requirements of Notoriety, Quest Completed, and Apocalypse. These events, combined with the centrals-only breakers and events like Inside Job and Feint, become substantially easier to play.

The most important synergies have the language, "whenever you make a successful run," or the like because these abilities trigger on both of Dopp's runs. Examples include, but are not limited to:

Other combos to note:

So, all you Doppelrunners out there, get to it! Comment with other combos or strategies if you discover any!

Never played the original Netrunner more than a few game, but i've heard that this console (going by another name) was pretty popular. And on cardboard, this seems nice : gain one click after a successful run for making another run. But it's not as popular on Android: Netrunner.

So what's the deal ?

What has two thumbs and earn you 1 for every successful run ? No, not Desperado : it doesn't have thumb, you silly.

For further look : same price, same value same faction, but given the Runner made a successful run, Desperado's ability is not conditional, while Doppelgänger's one might not be able to be played for every run, if the Runner doesn't have the money for.

(Data and Destiny era)
Lupus Yonderboi 236
The deal is mostly that desperado is every run and dopp is once a turn. Dopp does work well as tech vs asset spam decks though. — ChairmanHiro 17 May 2016