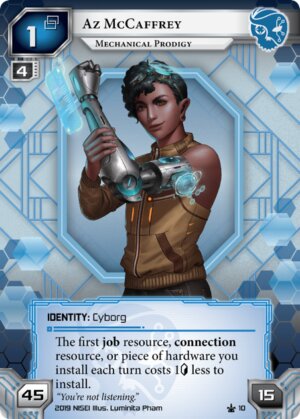 The first job resource, connection resource, or piece of hardware you install each turn costs 1credit less to install.

"You're not listening."
Illustrated by Luminita Pham
Decklists with this card

In a faction filled with some insanely good ID's like 419, Geist and Leela on the one hand and some bottom tier runners like Khan, Iain and Fisk on the other, it can be refreshing to see a new identity that is middle of the pack.

Az's last name is McCaffrey, which is no coincedence. He is Kate's son after all! And the resemblance is not only striking in the looks department. Just like his mother, his ability allows you to install hardware at a 1 credit discount. This discount also extends to Job and Connection resources, as opposed to Kate's Program discount.

So, first off, it is a fact many people aren't the biggest fans of "money" ID's, like Kate, Az, Azmari or ETF. And while I do admit these abilities aren't terribly exciting, I think there is something to be said for an ID that just allow you to have efficiency as your talent and focus on deckbuilding.

And deckbuilding for Az has definitely been a challenge! Because it is not as easy to install resources and hardware on the corp's turn as it is programs (especially in shaper due to smc), Az's ability will not fire nearly as often as his mother's. You could try to make up for this by adding a ton of cards to your deck to install something every turn. But I think it is a trap to want to lean into his ability too hard and run suboptimal cards like Armitage Codebusting or 3 copies of Flip Switch.

One way to play Az is as a goodstuff crim list, giving up 419's econ denial/turtle strength or Leela's disruption in favor of straight up econ. Boomerang spam is perfect for Az, as he can repeatedly install it for half the price. In combination with his console, Masterwork (v37), you are looking at a consistent clickless install + a free card. If you don't have a Boomerang handy, Flip Switch, Lucky Charm or even HQ Interface are all nice too. Az also gets discounts on strong crim connections like The Class Act and Hernando Cortez. If you feel like spending influence Professional Contacts, Beth and Aesop's Pawnshop are all great choices.

If you're feeling a bit more spicy, you could play Az as a derez deck, focussing on Rubicon Switch in combination with Mantle and Keros Mcintyre. Maybe add in stealth breakers like Afterimage while you're at it? Or pretend he's Sunny's godchild and focus on link. Security Nexus, Sports Hopper and The Archivist are all discounted after all.

I don't expect this boy wonder to win a big event any time soon, but I am happy he is in the game. Next time you wanna play Criminal and you are up for a new ID, maybe give Az a chance!