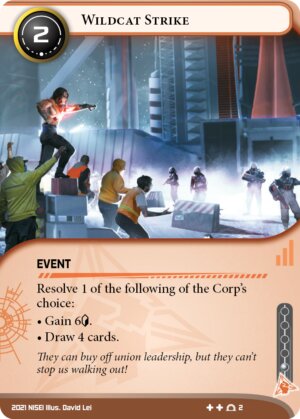 Resolve 1 of the following of the Corp's choice:

They can buy off union leadership, but they can't stop us walking out!
Illustrated by David Lei
Decklists with this card

Wildcat Strike is probably one of the most controversial cards in System Gateway. I've heard opinions about it ranging from it being massively powerful to worthless, and debates about whether it's ever correct for the Corp to give the Runner the cards. So here's my attempt to untangle the mess and work out how the card functions.

One of the core conflicts I've seen in the opinions about this card is between "the Corp should always choose the credits option" and "surely that makes no sense, there must be times when the cards are a better choice, otherwise this would just be a better Sure Gamble". Despite these opinions being at odds with each other, it actually turns out that both opinions are pretty much correct.

Let's look at the card from the Runner's point of view first. When you play Wildcat Strike, it either gives you +4 net, or else it gives you 4 cards at the cost of 2. The value of 4 Runner credits is fairly constant in Netrunner; most of the various economic quantities in Netrunner have wildly varying values, but (apart from the first few) Runner credits tend to have a consistent value over the course of the game (primarily because they're used to power icebreakers, so the number of runs you can make is directly proportional to the number of credits you have). So if the Corp picks the credits option, you gain 4 credits. The value of 4 cards is much less constant, though; if they're worth more than 6 credits, you'll get the credits (assuming the Corp knows what they're doing), otherwise you'll get the cards. So a simplistic look at Wildcat Strike gives the following options:

But there's a second choice to consider, here: although the card gives the Corp a choice, it also gives the Runner a choice. Nothing forces you to play events as soon as you draw them, so the Runner has the choice to not play Wildcat Strike, even if it's in their grip. They can choose to wait for a better opportunity – one where the cards are worth more – or even to not play it at all, because the card wouldn't be worth it. The point at which an economy event becomes truly worth putting in your deck is just a little short of a 4 gain (e.g. Sure Gamble, Creative Commission, Bravado, Career Fair are each worth approximately 4 when played). The point at which you might conceivably include it in your deck if you're really desperate for economy events is 3 (Easy Mark). The point at which you'd play a card if it somehow ended up in your grip, even though you didn't want it in your deck in this matchup, is around 2 (e.g. Infiltration, when you aren't in a matchup that needs the expose). So we have more like 4 options, based on v, the value in credits of 4 Runner cards right now (and bearing in mind that Wildcat Strike costs 2 to play):

So now we can see why it's usually correct for the Corp to choose the credits, given that the Runner is knowledgeable and chose to play Wildcat Strike: the odds that the credits are more useful to the Runner than the cards is aiming at a very narrow target, because if the credits were more than marginally more useful, the Runner would probably have delayed the Wildcat Strike until they could get more value from it. It's much more likely that 4 cards are worth more than 6 at any given point in time than it is for their value to fall into the narrow 5-6 range.

That isn't to say, though, that 4 cards are usually worth more than 6! Probably more than half the time, they aren't and you'd prefer the credits. So in order to make good use of Wildcat Strike, you need a deck that can often get into situations where the cards are particularly useful. Playing this sort of "opponent chooses" card can be very frustrating, because you need to design your deck and/or gamestate around increasing the value of one of the options, and then you don't even get that option, it's just that you had to plan for what would happen if you did. As an example, Cerebral Cast would have given you a desirable outcome – 1 brain damage – in the Jinteki decks that played it, back when it was legal. But in order to accomplish that, the decks had to run some proper tag punishment. This is despite the fact that it was nearly always wrong for the Runner to take the tag; the tag punishment was included in the deck without much hope of ever being able to use it, it was just there so that the Runner couldn't make the choice to choose the tag. Wildcat Strike is similar: you need to design your deck so that it could sometimes make really good use of a "draw 4 cards for 2" effect, even though it rarely actually gets that effect in practice; you just need to be able to realistically threaten it in order to force the Corp to give you the credits.

We therefore have to look at when 4 cards are valuable enough to be more than 6. Generally speaking, card draw is better earlier in a turn (so that you have more clicks to react to the cards you draw), so Wildcat Strike (despite not saying priority) is realistically best played on the first click of a turn. You also need to have a high enough credit total to be able to do something with the cards right away; playing Wildcat Strike with your last 2 remaining is generally unwise because you'll just end up stuck with a lot of cards and no credits to play them. Your deck also needs to be able to generate credits very efficiently, with basically no clicking for credits ever (otherwise, you could change some of the clicks you normally use for credits onto clicking for cards instead and get a similar effect). Your deck probably also needs to be good at emptying its grip – e.g. by being able to install things efficiently – so that you don't have to discard some of the cards you draw and reduce their value. Note that a side effect of all this is that decks where Wildcat Strike is good are typically also decks where Earthrise Hotel is good, so you should expect to see them in the same decks.

One other thing that you need to pay attention to is that Netrunner is a game of asymmetrical information – often, the Corp knows a lot more about what's going on than the Runner, and it's quite possible for the Runner to misevaluate and think they want cards when in fact the cards actually won't help them. For example, say the Runner is playing an Anarch deck full of cards that gain value from being discarded (like Paperclip and Exclusive Party), and cards like Moshing and Patchwork that can make use of spare cards. Wildcat Strike looks pretty good here, and the Runner may well fire it off while they have more cards in hand than usual (hoping to draw into Moshing if the corp chooses the discard option, and discard a bunch of conspiracy breakers and redundant cards). That's all very well, but if the Corp happens to be holding an Ark Lockdown, they'll simply just choose the option that floods the Runner with cards, and calmly negate all the gain that the Runner thought they were getting with a single operation (as a bonus, this can occasionally just win the game for the Corp on the spot by removing all the copies of a breaker at once). Wildcat Strike looked good, but it was actually terrible because the Runner didn't know what the Corp could do. I'd say that about a third of the time that a Corp player who knows what they're doing chooses to give the Runner the cards, this is the reason (the other two thirds of the time, the Runner either miscalculated, or misinterpreted "if the Runner plays the card correctly, the Corp should usually choose the credits" as "if the Corp plays the card correctly, they should usually choose the credits" and didn't realise that they couldn't handle being unexpectedly given the cards).

So is Wildcat Strike good? I think more than half of decks don't really want the effect; you need the deck to be much better at generating credits than it is at drawing cards to reliably get opportunities to use it, and also need the ability to be able to do something with lots of cards if the Corp does choose that option. That said, this isn't a massively rare combination of circumstances either; although probably most decks don't want this, there are quite a few that would. The problem, of course, is that in those decks it's just copies 4, 5, and 6 of Sure Gamble; it's a card that only goes into decks that can make masses of money and gives them more money (which it does very efficiently, but it isn't the economic quantity that they really wanted). So your deck needs to be making masses of money and still wanting more. Oddly, that still isn't all that rare a combination; it's uncommon, but if your deck is using a traditional breaker suite, it probably needs all that money to avoid running out of steam against glacier decks. So Wildcat Strike has its place, but it isn't a card that you can just blindly use without thinking about it.

(Also, a big thank you to NISEI's playtesting team for giving us all something to think about. The numbers on this card are really interesting and well-placed, and it's a testament to a well-balanced design that they can inspire so much debate!)

Q: Can the Corp choose the "Draw 4 cards" for the Runner if the Runner has fewer than 4 cards in their stack?

A: Yes. The Runner gets as many cards as possible from their stack with that option (this may include 0).

This is a good review, because it shows a big weakness of the card that could go unnoticed by some ^^

Cards that give the corp a choice often looks better than they are!

The numbers on this card is pretty good:

The problem of course is, that the corp will always give you the worst possible choice. And since draw is a premium compared to credits (especially in System Gateway where there are very few draw cards), this means the card will almost always say "Get 4 credits unless..." and the unless is those situations where you really need credits to get into a server for the game, or when you are on 2 credits and play this card last click with a full hand.

At one influence you may see this splashed out of faction, but as each "normal" runner faction just got new econ cards in System Gateway it is not so likely.

Thematically I like the card gives the corp a choice, as a Wildcat strike is a real thing: an unauthorized strike against both employers and union

Funny... I think of 6c as so much more valueable than 4 cards most of the time.

But I think we can agree on one rule when playing this card: Don't play it when only one of the choices is good for you.