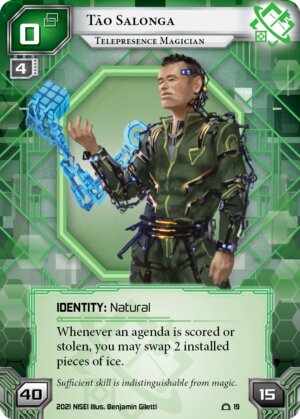 Whenever an agenda is scored or stolen, you may swap 2 installed pieces of ice.

Sufficient skill is indistinguishable from magic.
Illustrated by Benjamin Giletti
Decklists with this card

The design of this card is so egregious that it made me log into an account I haven't accessed in years. I was fairly intrigued looking at some of the reworked Core Set cards in the System Gateway set, as they often seemed to grok the ways in which the original cards were either too efficient or overbalanced. This card, on the other hand, abuses a disruptive technique that ANR made prohibitively expensive with good reason. It's almost difficult to describe the magnitude of how game breaking this ID is, because designing it requires a fundamental lack of knowledge of how Corp functions in regards to ICE. This attacks multiple pieces of ICE, often times in multiple servers, at the control of the runner, and is triggered by either player directly interacting with their win condition. The amount of time and resources it will take the Corp to mitigate the damage done by this ability text is potentially insurmountable. I'm in genuine awe that any amount of play-testing would allow this ID to survive with the text it currently has. At best, this card is an abberation of design philosophy that somehow escaped correction in testing. At worst it is a warning against once again getting emotionally invested in a game that remains dead.

Me, as a Jinteki PE player: "Ice? Do you want to swap that Pop-up with that other pop-up window or with that vanilla ice that you can already break? That's fine for me! Now let's get back to the net damage"

My point is that as a Corp player the real challenge for me has been playing against Leela, where I really need an extra clic for scoring stuff unless is the endgame and everything is rezzed.

Am I wrong? No, it's the playtesters who are out of touch. Really though, why not play with the card or watch some games with the card and see how it plays? From what I have seen it is a totally reasonable ability. I think just assuming that it is broken and that you're the only one who has caught it is silly.

The original playtest version was 'whenever an agenda is scored or stolen, do an Apocalypse', so just be thankful you still have all your ice!

The second iteration of this was - whenever the corporation scores an agenda, add Tao to your score area as an agenda worth 7 points. It was ready to ship until someone picked up it might be egregious thank goodness; playtesters completely missed it could be a problem.

The targeted ice. Ice. A group of cards that are willing to sit in the same position for clicks, even turns on end, performing some of the hardest, most mentally demanding tasks. Over, and over, and over all for nothing more than their rez cost...

This id is evidence that NISEI is in the pocket of Big (Rig) Shaper.

Thanks for all the replies, but please be careful as I'm not sure that the server can handle all 5 active Netrunner players commenting in the same day!

As to who eshered me, the truth is that it was a man named Damon Stone. He broke down the defenses to my heart, and I never recovered. This has given me a lot to think about. Maybe I'm being too harsh on old Damon, after all he never designed Tao.

Thanks for this review; I needed salt for the barbecue sauce I’m making, and this more than covered me.

someone got salty in their icecream

How do I unlike this.

You cannot, Conduit23. No one can.

Now that I've seen it play and played it myself, I like this ID. Full disclosure here : I've always liked Inversificator. That icebreaker is so much fun.

Tāo Salonga: Telepresence Magician is a little bit like Leela Patel: Trained Pragmatist, in the sense it will trigger for all agendas. But contrary to Leela Patel: Trained Pragmatist, unless you facechecked lots of ice, it will take time for you to know which ice to swap. So the gains are later in the game, unless the corp is using easily passable ices like Pop-up Window. Forged Activation Orders is very useful here, allowing you to know more ices without running them.

For corp that base their strategy on super ices like Border Control, Archer, Tollbooth, Hydra, Anansi or DNA Tracker and other expensive ices, it might get frustrating. But Thimblerig could be very useful to put the ices back in places.

The ID is not exceptionally powerful, but is a tremendous amount of fun to play. Also, the 40 cards deck size and 15 influences is perfect to make a compact deck that will be very reliable.