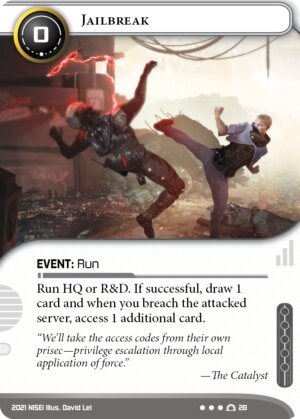 Run HQ or R&D. If successful, draw 1 card and when you breach the attacked server, access 1 additional card.

"We'll take the access codes from their own prisec—privilege escalation through local application of force."
—The Catalyst
Illustrated by David Lei
Decklists with this card

TL;DR: This card is pretty good.

I'll admit, at first glance, it did not impress me. Sure, it's neutral and zero influence, but +1 card access? Basically everyone has some kind of in-faction multiaccess that is better than this. So why would anyone bother with a neutral event that only gives +1 card?

Because it is both cheap and flexible.

First, the flexible bit - Most of the other multiaccess is either aimed at a specific server (Shaper and Criminal are almost entirely focused on HQ or R&D, respectively) or has some kind of extra condition or requirement. (Stargate requires an archives run later, Climactic Showdown has the whole corp choice thing, Counter Surveillance requires tags, etc.)

Jailbreak, on the other hand, requires nothing. You just pick a central server you'd like to see an extra card from, and off you go, seeing twice as many cards as normal.

But now let's talk about the cost aspect. Jailbreak costs 0, and draws you a card. (Assuming you get in, but that's something runners are usually good at.)

Cards that cost 0 and replace themselves in your hand are really interesting. Especially if they also replace an action that you might want to do, like run on a server.

Because they replace themselves with the card-draw, a 45 card deck with x3 Jailbreaks is actually pretty close to a 42 card deck, in terms of how fast you cycle through it and find things. (Assuming that you can get into a central to trigger the jailbreaks.) That's pretty cool.

Jailbreak isn't overwhelmingly powerful in any one single area, but it's flexible, has a useful effect, and it's basically free to play, and include.

I think this is a solid card. I expect to start seeing it around.

What’s with the theme? First I thought no way is someone escaping from jail but I guess the name jailbreak refers to jail breaking a tech device. Or maybe it’s a metaphor for the runner being onsite at the Corp (considering the art) and therefore getting better benefits for a successful run (physically breaking in to the crop servers). So my conclusion is it’s a mixed metaphor/wordplay type thing. Physical access to Corp site while ‘jailbreaking’ their server and reaping the rewards.