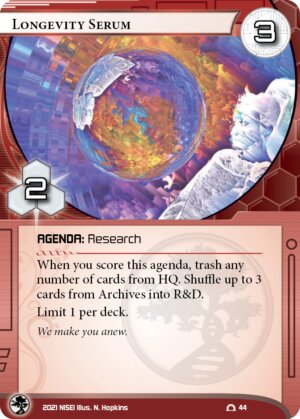 When you score this agenda, trash any number of cards from HQ. Shuffle up to 3 cards from Archives into R&D.

We make you anew.
Illustrated by N. Hopkins
Decklists with this card

If you're passing on a blank 3/2 like Project Yagi-Uda, I'd pass on this as well. Yes, it allows you to free up a deck slot that might have otherwise gone to Preemptive Action, but that isn't much value. It isn't good enough to replace the core functionality of Spin Doctor, instantly protecting agendas faster than the runner can react. An agenda will never be instant anything.

All of the other unique 3/2s have much stronger abilities which aren't easily replaced by a 0-cost card. Longevity Serum is not much better than blank. And, worst, when you really DO need Longevity Serum's effect, you're probably in a dire flooding situation, usually a hard time to score an agenda safely. Even attempting a Longevity Serum play to clear a flood leaves your extra agendas vulnerable in HQ at least 1 turn longer than they would have been with a Spin Doctor.

I would only choose this card in decks where trying to score 4/2s would be too hard (e.g. Shipment from Tennin decks can use it to recycle Shipment from Tennin back into the deck). If you can score 4/2s, it doesn't make sense to cut a 4/2 to include this card -- any combination of Nisei Mk 2, Cyberdex Sandbox, Corporate Sales Team, Viral Weaponization, and Offworld Office are much stronger.

This is the replacement for Philotic Entanglement, from the past meta. In my opinion, it is the weakest if the 2/3 agendas which have a limit of 1 per deck.

It is better than Project Yagi-Uda, whose secondary effect has almost never be seen in play, because it basically act like an instant Preemptive Action, with the possibility to trash card from HQ so that you may put them back in R&D, like if you are flooded with agendas.

This is why it is a worthwhile agenda for Jinteki, allowing you to have 7 agendas in a 49 cards deck (6 3-pointers and 1 Longevity Serum).

There are layers of art in this card, with layers of flavor, along with the quote. Nicely done.