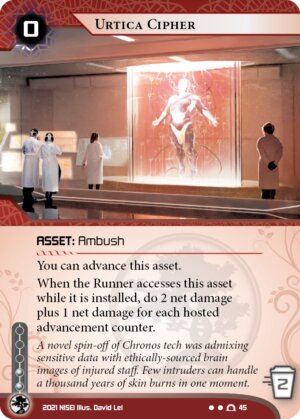 When the Runner accesses this asset while it is installed, do 2 net damage plus 1 net damage for each hosted advancement counter.

A novel spin-off of Chronos tech was admixing sensitive data with ethically-sourced brain images of injured staff. Few intruders can handle a thousand years of skin burns in one moment.
Illustrated by David Lei
Decklists with this card

Hey, it's the new Project Junebug!

It got buffed by quite a bit. Let's go down the list:

It does grow more slowly than Junebug, but thanks to the free +2 damage, it still keeps pace for a while. At 0 and 1 advancement, it's the better than junebug. At 2 they're even. 3 advancement and onwards, Junebug is in the lead, but in practice, it was very rare to ever land a junebug for more than 4 net damage. (Not impossible of course, but unlikely.) And of course, if you have 4 or more advancement on it, it's probably a moot point, since 6 net damage will kill almost as many runners as 8...

So this is very close to a strict upgrade from the venerable Junebug.

The only real big downside that I can see is the influence - Junebug was one influence, so it was extremely easy to splash. (Which was important, since in Jinteki everyone thinks about the possibility of Junebugs, but they're a lot less cautious around, say, Weyland!) Two influence for Urtica Cipher makes it harder to casually throw a copy or two into your non-jinteki decks.

Overall though, a welcome improvement to one of the most iconic traps in Jinteki's arsenal!

One other thing - this card is in the same set as Clearinghouse, which allows for some really nasty corp mind games. Just something to think about...

The increased trash cost is definitely a huge deal. Trap decks always folded quite hard to multi access. Sure, hitting Snare hurt, but for 0 credits you get to trash it

Same with Junebug, which does nothing in centrals. This is a nice buff.

Bwob's review did a great job covering this card in Standard. In Eternal, Urtica usually produces more damage at less cost than Junebug. Junebug needs 3 counters to overtake Urtica, and it has a $1 trigger cost which is a serious liability with all of the Account Siphons and Diversions of Funds flying around the eternal format. Both work well with Mushin, but Junebug is more dependent on Mushin to be effective.

Urtica also opens up some plays where you install it without counters. If you're in a low-econ situation where you're installing a bunch of cards naked, Urtica ($0 for 2 net damage) is probably more cost-effective than Snare ($4 for 3 net damage and a usually-trivial tag) or Breached Dome ($0 for 1 meat damage and a card trashed from stack). This line of play is generally more tempo-positive in Eternal, the card support is better (Turtlebacks for extra money, Breached Dome to help keep it cheap, Chronos Project as a huge threat you'd love to have lurking on the board, Jackson Howard for faster card draw). Many runners in eternal have cards which incentivize multirun turns, like Desperado and Crowdfunding, so if you install 3 naked cards they may actually have a strong incentive to check all 3, and Urtica (and Breached Dome) is always less of a drain on your budget than Snare or Junebug.